Xamarin's origins are with Mono, a project created by Miguel de Icaza as an open source and cross-platform implementation of Microsoft's C# language and .NET Framework. In 2011, Xamarin was cofounded by de Icaza and Nat Friedman, taking the Mono platform and making it a compiler for mobile apps targeting iOS and Android.

The Xamarin tools found an immediate welcome among Microsoft-platform developers wanting to migrate their C# skills and code to iOS and Android, especially in light of the failure of Windows Phone to capture substantial market share.

One of the factors in Xamarin's success was that unlike Mono, the tools were neither free nor open source. Licensing fees funded the company's growth and enabled it to develop the platform rapidly. That said, the high cost of the tools constrained their take-up, especially among hobbyists and small businesses.

Guthrie said that the Xamarin platform will now be free for Visual Studio users, including the free Community edition as well as Professional and Enterprise versions – drawing a big cheer from Build attendees.

In addition, Guthrie said that Xamarin's code will be open source, under the management of the .NET Foundation, home of Microsoft's other open source developer projects including ASP.NET and .NET Core. 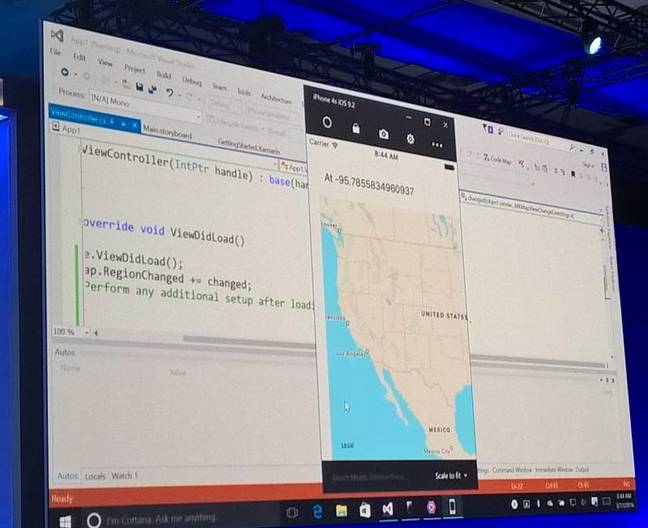 Miguel de Icaza also took the stage at Build, to show off a new feature: the ability to remote the iOS emulator to Windows in order to test and debug an iOS application in Visual Studio without leaving the Windows desktop. A Mac is still required, since part of the compiler runs on Apple's OS X.

Separately, Mono has been relicensed under the MIT license, which means it can now be used freely even in scenarios which would previously have required a commercial license. Mono is also being contributed to the .NET Foundation.

Microsoft's Xamarin strategy will boost usage of the tools and will further the company's ambition, announced yesterday at Build, to make Windows an all-purpose development platform.

That said, the preferred operating system of many mobile developers is the Mac, and while Microsoft's announcements will do much to keep its own developer community using Windows, winning back Mac-using developers will be more challenging.

Here's the thing though: it was open source guy de Icaza who took Xamarin closed source, and now it is Microsoft returning it to the community. Surprising times. ®