This time it's personal

TechCrunch has been hit by potty-mouth hackers for the second time in 24 hours.

The second hack (image below) features a foul-mouth rant aimed against site founder Michael Arrington. It also includes a link to the same online smut and warez-peddling Torrents site "promoted" via the previous attack.

Arrington, the crackers brag, should be grateful they didn't delete setup and registrations on TechCrunch's back end database when they attacked the site. 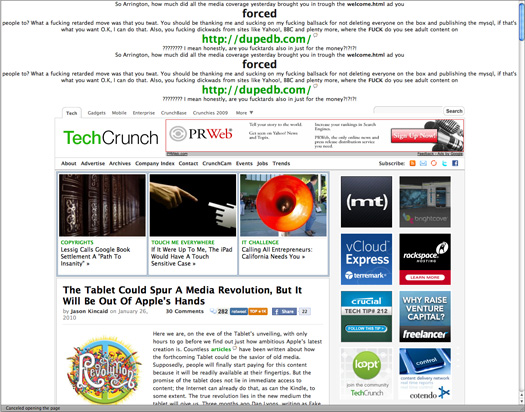 TechCrunch admitted on Tuesday that an exploit it was attempting to identify was behind the earlier Monday night hack, suggesting the same security loophole remains open and was used in the latest assault.

The motives behind the attacks, much less the miscreants behind them, remain unclear. However, the timing just before Apple's much hyped iTablet launch in San Francisco must be causing all sorts of consternation at the US-based tech blog.

TechCrunch was back up and running on Wednesday morning, well in time for the site to cover Moses Steve Jobs bringing the iTablets down from Mount Cupertino. ®