The fourth launch of NASA's high-altitude, heavy-lift super pressure balloon (SPB) is on hold while scientists wait for a break in the weather over Wanaka Airport, on New Zealand's South Island.

The SPB is designed for "ultra-long-duration flight of up to 100 days at mid-latitudes", at a more-or-less constant float altitude of of 33.5km. The mighty orb – crafted from "22 acres of polyethylene film – similar to a sandwich bag" and 516,499 cubic metres when fully engorged with helium - offers the chance to fly payloads which would otherwise require an expensive hoist into orbit. 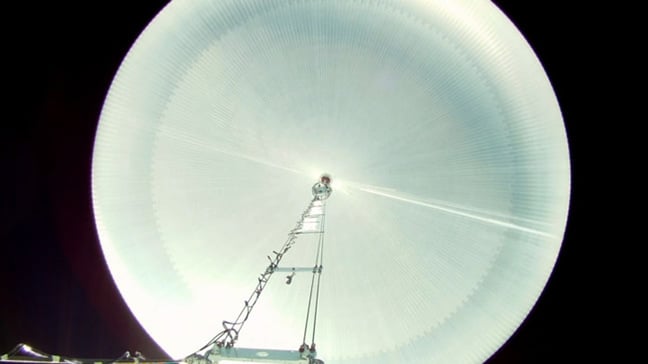 The forthcoming mission's main payload is the University of California's Compton Spectrometer and Imager (COSI) - intended to "probe the mysterious origins of galactic positrons, study the creation of new elements in the galaxy, and perform pioneering studies of gamma-ray bursts and black holes"

COSI was due to float heavenwards on 1 April, but the weather hasn't played ball. NASA says there won't be any attempt at a launch before Saturday at the earliest.

In the meantime, rather than sitting around twiddling their thumbs, the SPB team has been busy quantifying the mission in terms mere earthlings can comprehend. The balloon's 516,499 cubic metre volume is, for example, big enough to encompass a football stadium, although it's some way short of the 963,000 cubic metre envelope which lifts the Low Density Supersonic Decelerator (LDSD), and which would "fit snugly into Pasadena's Rose Bowl", as NASA previously explained.

While NASA is still struggling to accurately define the football stadium as a measure of globe vastness, it can confirm that the balloon's fully-inflated diameter (114.5m) is "nearly the length of six cricket pitches", while the height of 68.96m is the "same as the wingspan of a Boeing 747".

When the one kilocat mission does finally get off the ground, those south of the equator might enjoy a quick glimpse. NASA explains: "As the balloon travels around Earth, it may be visible from the ground – particularly at sunrise and sunset – to those who live in the southern hemisphere's mid-latitudes, such as New Zealand, Argentina, Australia and South Africa."

The chances of eyeballing the massive sandwich bag depend, of course, on just how long the thing stays in the air. The SPB flight record is currently 54 days, which began at the previous Antarctica launch site back in 2009. The first mission from Wanaka in 2015 stayed up for 32 days, 5 hours, and 51 minutes before a leak prompted a flight abort over Outback Australia.

*NASA elaborates: "Looking closely at the balloon, one can see the different sections or gores – 280 altogether – that are heat sealed together to build the balloon."