How Remix's Android will eat the world

Apple, Microsoft, are you listening?

Interview Which platform will the next billion people on the internet use? Is it more likely to be Microsoft’s Windows squeezed onto low-cost mobile hardware, or a mobile OS given some steroids? Three former Google executives are betting it's the latter.

And based on Jide’s early showing, a revved-up Android called Remix OS is a serious contender. Jide’s Remix OS adds multitasking, windowing and other productivity smarts to open Android, and packages it up nicely. It’s free and runs on cheap ARM or x86 hardware, and as I found in my recent hands-on, the apps are already there. It isn’t hard to imagine this taking emerging markets by storm.

I met Jide co-founder David Ko and international marketing honcho Jason Zheng recently in London to get the full story.

Along with co-founders Ben Luk and Jeremy Chau, Ko began thinking about adding productivity features to Android in late 2013. Chau had been at Google since 2000, employee No.103, and the first engineer on AdWords and Google Talk. He left in 2008 and began investing in startups. Ko had joined via an acquisition in 2003. Ben Luk had also joined the same year, working on Google Maps and mobile products.

What struck the group was that everyone was talking about the “Post PC” era, without missing the obvious. Pundits talked about permanent fragmentation, and Microsoft was beginning to put together its Universal Windows plan. But there already was a “unifying platform” in plain view: it was Android.

What Android needed was productivity features, and that’s been the goal of the Remix system. Jide incorporated in 2014 and made an interesting bet. All three founders are Chinese American, but they chose to found the company in the innovation hotbed of China, close to the engineers and supply chains they needed.

“China is where the talent pool is,” says Ko.

There was a specific reason, too. Jide wanted to extend Android from ARM to x86, and developed a close relationship with Android-x86 project founder Chih-Wei Huang, an open-source veteran based in Taiwan. 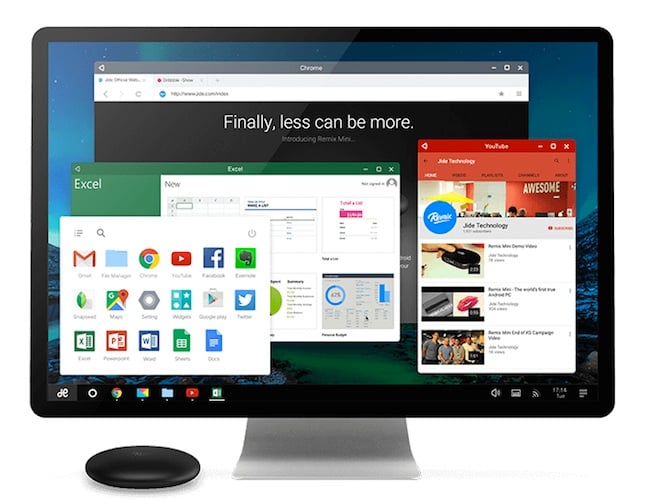 Jide knew they’d need to do more than tweak a window manager, and set about making proof-of-concept hardware that was attractive in its own right. So far, Jide has announced a tablet of its own, and a cute pebble-shaped PC, not much bigger than a mouse: the Jide Mini. Launched on Kickstarter, the Mini project raised $1.6m.

As Jason Zheng told us: “There’s a saying of Alan Kay's: ‘People who are really serious about software should make their own hardware’.”

“We needed to tweak the firmware to optimise performance and boot-up time. It can have a huge impact on battery life.”

With hardware tweaks, Remix OS can deliver blistering performance, booting on a Dell in six seconds.

The Jide team also worked on developing a file manager with real drag-and-drop. But the main goal has been improving multitasking. It’s there in AOSP, but typically carefully managed in real world Android phone implementations, with “off” being the default. In January this year, Remix OS was downloadable for anyone who wanted it.

In reality, the multitasking works well.

But isn’t there already a platform for “the next billion” (TNB) from the former mothership? Google’s Chrome OS is low-cost computing and has made headway into education sales.

But Jide thinks that’s where it will stay. Chromebooks stay in the classroom, close to a reliable broadband connection. Chrome OS’s limitations are apparent outside the classroom, and offline a Chromebook is perceived to be an expensive brick.

(That isn’t quite true - you can work offline and sync your changes back to Google - something many people are doing anyway on a full fat PC - but it can still be a hassle).

“The Chromebook model does not work well in the consumer segment”, says Zheng. In any case, he points out, it’s not as cheap as it looks, with subsidies.

With its Kickstarter roots, you can be forgiven for thinking Jide is a few guys in a shed. It has around 150 staff, and Foxconn is a Series A investor. The huge manufacturers doesn’t just want to build to order, but help create new markets.

So far Jide has announced only one OEM, Tecno Telecom, “Bigger than Samsung in Africa”. “But we will announce top-tier OEMs in late 2016,” says Zheng.

“The big guns are coming in,” says Ko, referring to Apple’s iPad Pro launch this year. That’s Apple’s lavish attempt to turn a mobile platform into a productivity platform. But Jide is aiming lower, with productivity software running on hardware costing a fraction (typically one-tenth) of an iThing. “It’s a natural upgrade for the emerging market,” he says. Those next billion will be moving from a cheap Android phone to an Android tablet/desktop. It’s still Android."

There are a few issues to address, as we found out. The main one is that to use Remix OS effectively on a PC, you must sideload Google’s Play Store, then wave a dead chicken over the PC. Jide says it’s working with Google to ensure Play Store is bundled.

It's an ambitious plan, and I wouldn't bet against it.

Apple may have entered the market of "mobiles doing grown up work", but it's pretty relaxed about Android on commodity hardware, where Jide will compete. It waits for the market to mature, betting the customers will be attracted to Apple's brand as their spending power increases. It's Microsoft who has most to worry about, as a multi-windowing, multitasking Remix OS with Google Play Store has something rather important that Windows 10 Mobile doesn't: apps. And lots of 'em.

My Remix OS installation on an old Thinkpad didn't care that the apps were Android apps, they just ran because they're written in write-once-run-anywhere Java. And once I'd got the Play Store running, I had a rich selection of my usual apps, running nicely, without being nagged once. ®