Oh, and the supply mission is also a success so far

Video SpaceX has finally succeeded in landing the first stage of its Falcon rocket at sea – after blasting off more supplies to the orbiting International Space Station.

Landing from the chase plane pic.twitter.com/2Q5qCaPq9P

What you're seeing here is the lower stage of SpaceX's Falcon 9 rocket land on a drone barge minutes after lifting off from its launchpad in Cape Canaveral, Florida. The lower stage makes up the majority of the rocket, and lofts the smaller upper stage more than 200km into the Earth's atmosphere.

While the lower stage returns to the surface to be reused for future launches, the smaller upper stage carries a Dragon capsule containing supplies onwards to the space station; that second stage has now fallen away and will burn up in Earth's atmosphere while the capsule continues on to the orbiting science lab.

This vertical landing is going to be critical to SpaceX's plans for reusable rockets. The American biz has managed to land rockets on land, but sea landings are needed because some missions require so much fuel that the first-stage rocket can't make it all the way back to land. Of course, SpaceX now has to check over the rocket and prove it can be safely relaunched – otherwise, it's not really all that reusable.

SpaceX must have been feeling confident, because the company live-streamed the landing from a helicopter. The rocket came down at a slight angle before straightening up in the last few seconds of flight and landing slightly off the center of the SpaceX logo that adorns the good drone-ship Of course I still love you.

In the meantime, the Commercial Resupply Services mission (CRS-8) is heading off to the International Space Station. The Dragon capsule has successfully deployed its solar panels and will dock after it has been captured by the station's robot arm.

The SpaceX team had a single-second launch window on the mission and had lofted nearly 7,000lb (3,175kg) of supplies and scientific experiments for the crew on the International Space Station. It will remain on the station until May 11, when it will return loaded with trash and the results of experiments for splashdown off the California coast.

The largest item in the outgoing supply mission is an inflatable habitat called the Bigelow Expandable Activity Module (BEAM), which accounts for about half of the total payload. The 3,086lb (1,400kg) pod will be blown up to 16m3 and attached to the side of the space station but will remain uninhabited initially while safety checks are made.

The BEAM is built of layered fabric to protect against micrometeorite damage and impacts from small piece of space junk. The Bigelow team wants to build much larger versions that act as a space hotel for well-heeled tourists. After testing, the ISS version will be detached and fired back to Earth so that it can burn up in the atmosphere.

Also on board is the Rodent Research-3-Eli Lilly project, containing mice that will spend time in the microgravity of the space station before being returned to Earth. Scientists want to dissect the mice and discover how badly they have suffered from muscle loss and bone decay while in orbit. 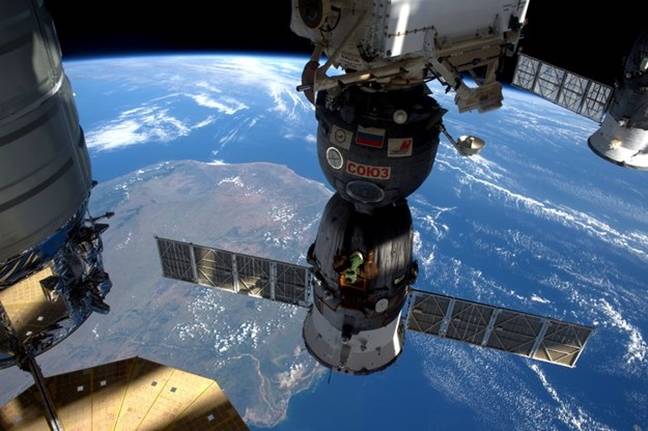 Parking spaces in high demand on the ISS

When the SpaceX Dragon capsule docks it will find the ISS has a visitor for it – the Cygnus capsule built by Orbital ATK and sent up to the station on March 26 on another supply mission. It will be the first time the two rival companies have had spacecraft attached to the ISS and the astronauts will be able to do a side-by-side comparison. ®