We could see nine platter helium-filled disk drives because the manufacturers can cram more thinner platters inside a helium-filled enclosure.

According to a TrendsFocus report, current disk platter separator components could be eliminated and enable eight or nine platters to be used in the same 3.5-inch enclosures that currently house seven platters.

The platters could have a slight diameter increase and hold up to around 1.5TB each, using current perpendicular magnetic recording (PMR) tech.

This means a nine platter drive could reach c14TB. Shingled magnetic recording (SMR) could boost that further, possibly by up to 30 per cent. 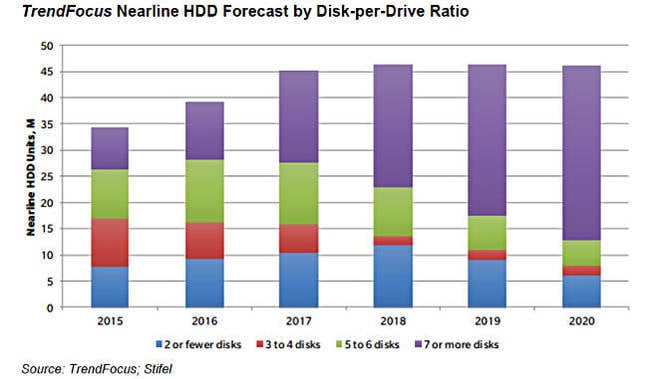 On the legend "disks" means platters.

Such nearline drives, it is thought, will appeal more to hyper-scale data centres and cloud service providers than enterprise data centres. ®