Solar panels could generate power at night and during inclement weather by harvesting energy from raindrops, research finds.

The panels are built from highly-conductive graphene. In the presence of water, the material binds positively charged ions with its electrons. It is difficult to mass produce.

Key to the operation of the graphene is impurities in rainwater, particularly salts which disassociate into positive and negative ions. It's the positive ions that bind to the graphene, in sufficient numbers to produce a charge and a current.

Water sticks to the graphene in a double-layer pseudocapacitor with the graphene electrons which produces electricity, researchers say. There's a fuller explanation of the role of graphene in the cells here.

Professor Qunwei Tang, Xiaopeng Wang, and doctor Benlin He of the Ocean University of China, and professor Peizhi Yang of Yunnan Normal University described their work in the paper A Solar Cell That Is Triggered by Sun and Rain [supporting paper].

"All-weather solar cells are promising in solving the energy crisis," the team says.

"A flexible solar cell is presented that is triggered by combining an electron-enriched graphene electrode with a dye-sensitised solar cell. 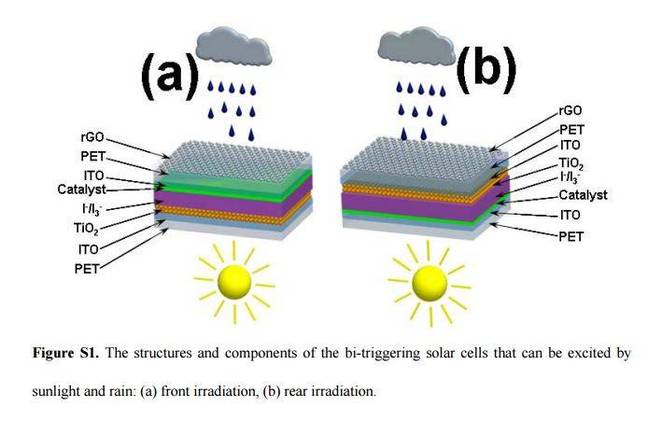 "The new solar cell can be excited by incident light on sunny days and raindrops on rainy days."

The model achieves a 6.53 percent conversion efficiency in tests of simulated raindrops at 1.5 atmosphere.

They say their concept will help guide the design of advanced all-weather solar cells and is one technology to overcome one major disadvantage of solar power. ®