A story of wellies, the DMCA loophole, and music

Analysis If you want to understand the economics of the music industry, imagine that you make wellies: Prestige Boots. They’re excellent wellies, well reviewed and loved by customers.

You deserve to crack the big time, so you arrange a meeting with Hypothetical Hypermarkets. In his swanky office, the Hypermarket buyer tells you how much he wants to sell Prestige Boots, and flourishes a contract.

It pays almost nothing. Then, out of the corner of your eye, you notice trucks pulling up outside, and men unloading boxes of what look suspiciously like wellies. They are, and they’re branded Prestige Boots.

But you didn’t make them.

“Excuse me,” you ask, “but you’re using a knock off of my product and I’m not getting a penny.”

The Hypermarket rep can barely repress a smirk.

“I’m so sorry, Mr. Wellie Maker. You see, those lorries aren’t anything to do with us. Random people just leave those knock off Prestige Boots in our shops. But whether you sign this deal or not, we’re going to distribute these things labelled Prestige Boots.”

“How can this be?”, you ask. “Prestige Boots are a protected brand, and that’s an unauthorised knock off!”

“Well under Section 512 of the Digital Millennium Outdoor Boots Act,” he explains, “we’re an innocent party. Those wellies are user generated wellies, stored and controlled at their owners’ discretion. It’s nothing to do with us.”

“But this is outrageous. You’re profiting from the traffic I generate for you. I’m going to use the full extent of the law to stop you.”

“Be my guest,” he replies. “You go ahead and do that. Here’s a form called a takedown request. It obliges us to remove one single pair of knock off Prestige wellies from our distribution chain. And that pair of wellies will probably be back in our distribution chain tomorrow, or next week. Then you can go fill out that form all over again.”

He pauses while you take it all in.

“And every other supermarket and retailer operates in exactly the same way. One takedown per pair, remember.”

The reality dawns on you that filling in a form for every pair of knock-off wellies is going to cost you a lot more than it’s going to cost Hypermarket. It’s time to do your best “stomping off in a huff” impression. He hands you the contract anyway.

Then on your way out you notice a curious clause buried in the small print.

Under the heading “Covenant Not To Sue,”* the unsigned contract states that: “Prestige Boots guarantees to covenant and indemnifies any third party supplier to Hypermarket of any product branded Prestige Boots, or resembling in any way a Prestige Boots product.”

Before you slam the door, the Hypermarket rep mouths the word “SOPA.”

Sound fair to you? Perhaps not.

How the illegal supply chain distorts the price of music

The effect on wholesale wellie prices is dramatic. YouTube competes alongside wellie suppliers who disavow this practice and only buy Prestige Boots from Prestige: Spotify and Deezer. In 2015, according to IFPI (International Federation of the Phonographic Industry) figures, YouTube generated an average of $0.72 in music royalties per user. In 2014, Spotify generated $20.16 per user: 28 times as much.

The gap between $18 and $1 is called the “value gap.” It doesn’t mean every YouTube view would be worth 18 times as much overnight, of course, if the legal loophole disappeared. But it shows how effectively an illegal supply chain can depress prices across the entire wholesale market – and drive suppliers to strike desperate deals they wouldn’t otherwise contemplate.

In our analogy, Hypermarket is just one of many suppliers. But in music retail, YouTube is the dominant force. Google’s supply of “free” in turn has a consequence for legitimate suppliers such as Spotify, who, in turn, can drive down their rates. Songwriters and musicians have withdrawn music in protest from streaming services at the rates offered.

So perhaps now you can begin to see why the DMCA takedown procedure is nicknamed “Notice and Shakedown,” and why music owners want “takedown to mean stay down.” By itself, de-risking an intermediary is sensible. But look at the bigger picture. In reality, the DMCA’s UGC clauses are implemented in such a way to absolve those intermediaries of the obligation to behave ethically. The law permits Google’s YouTube to maintain an illegal supply chain alongside its legal supply chain.

In its annual digital music survey published today, global trade body IFPI has some good news. “Music consumption is exploding worldwide, and it’s a 3.2 per cent increase. The question could be why is it not higher?”

Streaming revenue has risen to $2bn, while digital downloads fell ten per cent to $2.9bn. Ad-supported streaming services bring in just $680m. Revenue growth is largely powered by just two services: Spotify and Apple, a streaming newcomer. And both are dwarfed by the world’s biggest music service, YouTube.

There’s a very important part missing to our wellie analogy.

Filtering? Oh, let’s leave that off for now.

If you refuse to sign then Google won’t turn the Content ID filters on**, and the lorries will keep dumping inferior versions of your product by the back entrance, and you’ll have to keep filing a form for every pair of wellies.

So there are lots of moving parts here. There’s the UGC loophole in the DMCA that encourages intermediaries to look the other way, but is now being used in ways that it were never envisaged. There’s the onerous and ineffective takedown bureaucracy for suppliers, and also the refusal to use cheap, modern technology to clean up the supply chain cesspit. All this sits against the ominous backdrop that Google’s astroturf mobs will be unleashed on anyone upsetting the apple cart. SOPA was a clumsy attempt to solve this problem – but the underlying problem hasn’t gone away.

The cumulative effect isn't just bad for producers, but consumers too, because YouTube isn't as great as it could be. Google can’t issue licenses: remember, it’s not its stuff, and the law incentivises Google to look the other way. Google does not have any incentive to build a better music service around that UGC content.

Right now, the future of the DMCA’s 512 is under review in the US, and what happens next is likely to be imitated all over the world, just as the original DMCA became the template for infringement liability legislation. For their part, the intermediaries have got immensely rich from looking the other way, a luxury the UGC loophole gave them, and are already complaining about how onerous filtering would be.

But it should not be beyond the wit of man to tweak the legislation so everyone’s happy. It should preserve the ability of internet companies to come up with new services – while gently reminding them of their social responsibilities to treat people ethically. A "duty of care" if you like.

* The Covenant Not to Sue was part of the contract indie labels were ordered to sign in 2014. Google said it would remove their music from YouTube if they refused. 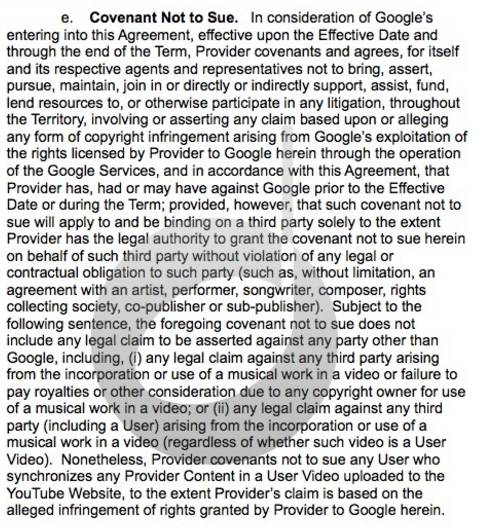 ** As explained by a YouTube rep to independent musician Zoe Keating.

The internet giant, a doomsday religious sect, and a lawsuit in Silicon Valley
Bootnotes16 Jun 2022 | 39