This headline will, in part, cost pepper-spraying University of California, Davis $175k 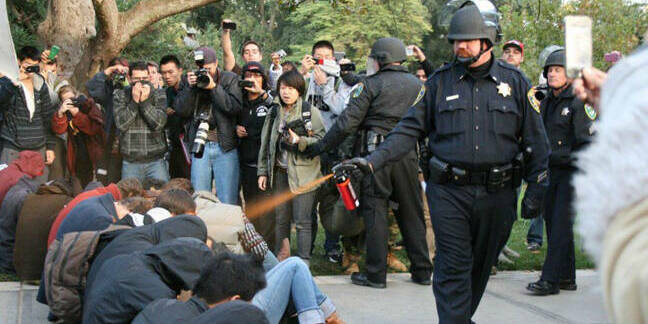 The University of California, Davis has spent $175,000 on search engine optimization (SEO) and online reputation management – to hide an embarrassing incident in which students were pepper-sprayed on campus.

The massive bill has come to light this week after the Sacramento Bee filed information requests on the university's expenditure after it noticed that its "strategic communications budget" has nearly doubled from $2.93 million in 2009 to $5.47 million in 2015.

The newspaper found that the university had taken out several contracts aimed at "cleaning up the negative attention" that the university received when students were pepper-sprayed in November 2011 during a protest over large tuition fee hikes and in support of the broader Occupy movement of that time.

The incident received worldwide attention when video was published of UC Davis police officer Lt. John Pike nonchalantly spraying a group of students with the chemical spray while they sat on the ground holding a peaceful rally.

It caught the public's attention, even becoming a meme, with people Photoshopping Pike into a range of historical images.

In an effort to limit the university's connection with the pepper-spraying, UC Davis hired Maryland-based Nevins & Associates for $15,000 a month for six months to "create and execute an online branding campaign" not just for the University of Davis, but also its chancellor Linda Katehi, who was widely criticized for her handling of the protests and faced calls for her resignation.

The university paid Nevins's firm $92,970.73 from January to July 2013, the additional costs coming from travel and lodging for Nevins associate Molly White. Despite being nearly two years after the event, the timing is thought to relate to the release of 10,000 documents from the university that were published just a few months before the company was hired.

Nevins' efforts appeared to have a limited impact however, and in July 2014, UC Davis hired local firm ID Media Partners (IDMLOCO) to "design and execute a comprehensive search engine results management strategy" and "achieve a reasonable balance of positive natural search results on common terms concerning UC Davis and Chancellor Katehi" – in other words, get positive information about Davis and Katehi higher up in Google rankings and push negative coverage further down.

It signed a contract for $82,500 with IDMLOCO, renewing it in February 2015 for $8,000 a month to create an "integrated social media program for executive communications," and a third contract in September 2015 for $22,500 a month (up to a maximum of $67,500), for an "assessment of the University's Strategic Communications redesign."

The news of the spending on SEO and online reputation management comes as Katehi is again in the spotlight after it was revealed she sits on the boards of a textbook publisher and a for-profit university, for which she is paid tens of thousands of dollars a year.

That news renewed calls for her resignation – and, according to the Bee, resulted in yet another contract being signed to "work on the school's image."

The latest revelations about hundreds of thousands being spent on manipulating search results have also attracted the attention of politicians, with Assemblyman Kevin McCarty telling the Bee:

"It is troubling that the administration chose to spend scarce public dollars and to nearly double its PR budget when tuition soared, course offerings were slashed and California resident students were being shut out."

Of course, the sad truth is that what was already a terrible use of public finances has become even more wasteful as a result of this story, and the many others that are sure to follow. ®

UC Davis chancellor suspended after headlines like this one undo $175,000 online name-scrubbing efforts

Boffins don't give a sh!t, slap Trump's face on a turd in science journal

Good news: Largest, most ancient known galaxy supercluster is spotted. Bad news: It's collapsing on itself

From 0 to ERUPTION in 60 days: You thought that volcano was COLD?