Comment Gartner's gurus have ranked the top twelve object storage suppliers in a Critical Capabilities report, with Cleversafe at the top and Huawei last.

The report states: "Object storage is pervasive as the underlying platform for cloud applications that we consume in our personal lives, such as content streaming, photo sharing and file collaboration services. The degree of awareness and the level of adoption of object storage are less in the enterprise, but they continue to grow."

The authors compare 12 object storage products against seven critical capabilities in use cases relevant to infrastructure and operations leaders. The use cases are analytics, archiving, backup, cloud storage, and content distribution.

The vendors are given scores between 1 and 5 for each capability:

There are various charts for specific object storage use cases, such as analytics, and an overall chart, which we have reproduced here: 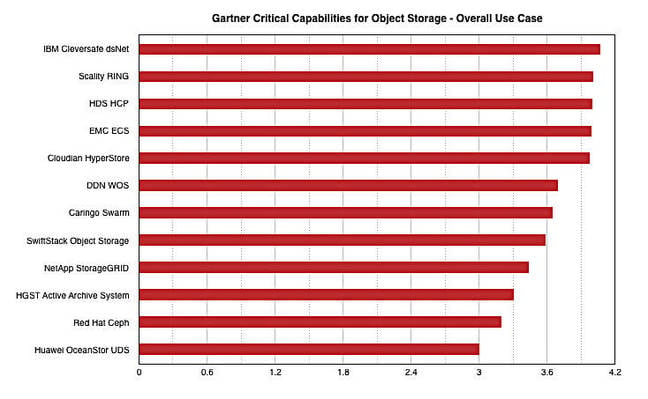 The report identifies weaknesses/challenges for the vendors, such as:

Check out a copy of the report here. ®

* The latest HGST entry-level SA1000 appears to be a response to this issue.