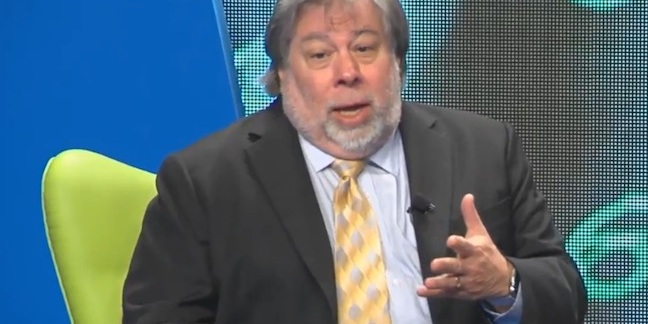 Steve Wozniak at the Future Transport Summit in Sydney today

Steve Wozniak has decreed that today's crop of wearables just aren't that useful – even Apple's own Watch.

Speaking at the Future Transport Summit in Sydney today, during which Wozniak declared he is not an expert on transport and therefore a mere lay person when it comes to predicting its future, the Apple co-founder said wearables are “not a compelling purchase.”

His reason for criticism was that the devices just don't offer much computing power and are frustratingly dependent on phones for connectivity.

Wozniak prefers as much functionality as possible to be available in hardware: he said the iPhone 4's voice hardware-based recognition did a fine job of obeying commands like “Call John”, but that once Siri arrived in the iPhone 4S that command required a network connection and therefore became less useful.

His Apple Watch, he said, frustrates him in similar ways as he's sometimes tried to pay for items with his Watch only to realise he left his iPhone at home and therefore lacked the network connection needed to complete the transaction. (Actually, Woz, you don't need your iPhone near your Watch to make a payment.)

Overall, he rates his Apple Watch “an expense that bought me a few extra niceties in my life”.

“It's more like a Bluetooth connection to my phone,” he said. “We all wore Bluetooth in our ears for about a week,” he added, explaining that Bluetooth ear-pieces made for marginal gains but made wearers look dorky. Wozniak implied we'll soon feel the same about the current generation of wearables, and that Apple won't be immune to the backlash.

“People say that if you put the name Apple on it, people will line up to buy it,” he said of the Watch. “I think it needs a little more than these watches have.”

Other observations Wozniak offered during his Q&A session included:

Wozniak also revealed he signed up to buy a Tesla 3 on the first day the car went on sale, without knowing anything about the car, because he felt he just had to be in the queue.

A bit like The Register felt we just had to watch him do a Q&A in our backyard, perhaps. ®

'A lot of what was wrong with the film came from Ashton...' - Woz

And a very, very, skimpy teaser trailer in which everyone is grumpy with the iGod