They Came From Beyond Our Galaxy And Landed In The Ice! 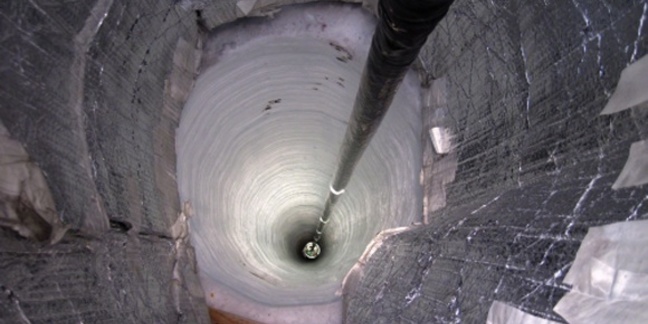 One of IceCube's detectors being installed

“Big Bird”, a neutrino spotted in December 2012, probably started its life nine billion years ago in a quasar far, far away: so says the international team of boffins who run the IceCube detector beneath the Antarctic ice.

By 2013, the IceCube collaborators believed they'd spotted extragalactic events: now they believe which source outside the Milky Way they came from.

Neutrinos are hard to spot in the first place: they have nearly no interaction with normal matter, and when they do interact, the signature is really hard to separate from noise. Hence locations like IceCube – instruments watching a cubic kilometre of ice in the Antarctic for the Cherenkov radiation flashes that indicate a neutrino actually hit something.

Most of the neutrinos detected by such experiments come either from the Sun, or from high energy cosmic rays striking the atmosphere.

Hence the excitement about this paper in Nature Physics (pre-press version at Arxiv here): the team believes it's found the first neutrino traces to an origin outside the Milky Way.

As Dr Phil Edwards of Australia's Commonwealth Scientific and Industrial Research Organisation (CSIRO) told Fairfax Media, the PeV-energy neutrinos are so rare they get names drawn from Sesame Street.

And Big Bird is the one best associated with its origin, because it came from (roughly) the right direction and was spotted at the right time to have been emitted by a “blazar” called PKS B1424-418.

The blazar – a compact , radio-loud quasar a little over nine billion light years away – is believed to have a supermassive black hole at the centre, which fortuitously has its jets aligned towards Earth.

The researchers note that as they get better at identifying extra-galactic events, neutrinos can give us a window into the centres of galaxies, seeing through the dust that otherwise that puts a curtain in the way. ®