Industry talk has it that Apple is working on "something" to do with virtual reality.

If true, it will not be Cupertino's first such effort: twenty years ago the company's first attempt in the field flopped, but ultimately and unintentionally spawned the RSS metadata format used by just about every website everywhere.

This story starts in 1996, when the world was going through one of its periodic spurts of enthusiasm for virtual reality. Apple decided it had a role to play by cooking up a standard to turn the entire web into a VR-style fly-through experience.

Apple's plan started life as "Project X" but was re-named "Hot Sauce". That second name was also given to a Netscape plugin that rendered appropriately-formatted web pages in a virtual fly-through format.

Hot Sauce's key ingredient was the Meta Content Format (MCF), a metadata schema that let developers define a title for a page and a place for that page in a hierarchy. There's a .MCF file to view here.

When a Netscape user running the Hot Sauce plugin reached a site with the .MCF file describing the site's content, they saw something like the picture below: 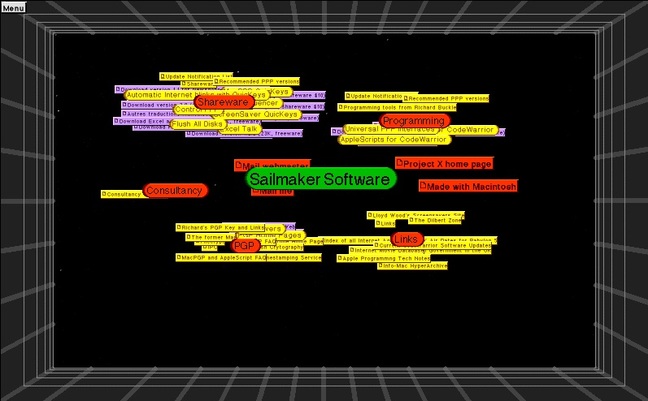 What are you looking at? We can't find a video of Hot Sauce, so we'll try to talk you through it.

The big green label marked “Sailmaker Software” is the home page for a company of the same name. Click it and you'd be taken to that page. Or perhaps you wanted to dig deeper into the site. The large orange labels depict the pages linked to from Sailmaker's home page. The yellow labels are a deeper layer of links and the purple buttons are a layer deeper still.

When you clicked in the region of a label, the Hot Sauce interface zoomed in to expose the nearby labels on the same level. So clicking near a purple label would zoom in to make all the other purple labels visible. As users moved between levels, labels “flew” out of the way. The 3D effect of the surround helped the illusion along. It wasn't even close to a convincing VR experience but did make it plain what was going on.

The idea behind MCF, as the Wayback Machine thankfully records, was: “To provide an adequate system for representing a wide range of information about content.”

The author of that quote is Ramanathan V. Guha, who joined Apple in 1994. Guha was interested in MCF because he felt the Web's lack of context was a major flaw. Web pages were readable by browsers and humans, but they contained no metadata to explain what the page was about.

Guha's observation, and the creation of Hot Sauce, made a certain amount of sense in the pre-Google times of 1996, when indexing and searching a site's content wasn't always effective or easy. But Hot Sauce was also an oddity Apple couldn't sustain once Steve Jobs purged the company of non-core products on his 1996 return. So it was quietly shelved even though several thousand sites, among them Yahoo!, had adopted the format.

Yet MCF is more than a footnote in the history of computing. Guha's treatise explaining the need for MCF is titled Towards a Theory of Meta-Content and remains online today.

Guha's logic is sound, at least for pre-Google times. Ironically, that's where he works today as a research fellow and still works on metadata. In between Apple and Google, Guha had a stint at Netscape where he was asked to collaborate with a chap named Tim Bray.

Bray writes that he and Guha (“everyone calls him Guha because they're scared of 'Ramanathan,' go figure”) were asked to make “... something happen with MCF by combining it with XML.”

Netscape wanted that something because Microsoft was already using XML for an effort called Channel Definition Format (CDF).

To understand CDF you need to remember PointCast, an application that scraped websites and news services, then aggregated their content into a desktop application that also operated as a screensaver. PointCast scrolled headlines around your CRT to avoid the terrible spectre of CRT burn-in.

In 1997 PointCast was hot. So hot that News Limited offered to buy it for $450m, elephant bucks even by the standards of the first dotcom boom. Wired was so taken by PointCast and competing “push” services that it declared, in 1997: “Remember the browser war between Netscape and Microsoft? Well forget it. The Web browser itself is about to croak.”

Oops. Not your best work, guys.

Microsoft was upset by the rise of PointCast and so built a competitor in the form of Internet Explorer 4.0, which offered a feature called Active Desktop that piped in HTML content from around the web so it could appear anywhere inside the Windows File Manager. Imagine news headlines scrolling across your desktop and you'll get the idea.

PointCast and IE 4.0 made a certain amount of sense because they permitted offline reading at a time when dialup internet subscription were either billed by the minute or came with a certain number of monthly hours online. A tool that downloaded content in the background and made it available for offline reading was therefore valuable.

Your correspondent, for example, used to dial up to collect email on arrival at work and then again at lunchtime. If I left the connection live while buying a sandwich, PointCast would download lots of content that I could read while chewing – but not chewing through my dialup account's short time allowance.

CDF eventually flopped because it was yet another example of Microsoft cluttering the desktop. Nobody other than Microsoft adopted it, but it was supported for years until IE 7 put it out of its misery.

Guha and Bray continued to work on MCF because Netscape thought custom web browsers were critical to its future.

That idea came about because in the late 1990s pre-italics Yahoo! became the darling of the Web as it articulated a strategy to become a portal to numerous online services rather than just a search engine. Netscape decided a customisable browser would trump a portal, if users could pipe in their preferred content so they'd have a home page tailored to their desires.

Guha and Bray had just the thing to help Netscape realise that ambition: the Resource Description Framework (RDF) they'd cooked up using MCF as its foundations. Netscape tried to promulgate RDF to publishers in the hope they'd want the chance to get their content in front of the then-colossal audience using Netscape every day.

By early 1999, Netscape was ready and launched the My Netscape service, which relied on RDF files describing sites that could be piped into personalised portals. Some time in 1999, another Netscape staffer named Dan Liddy was asked to work on RDF. The next year he posted the story of his work on the project to a Yahoo! Group (regwalled).

That post says: “The original RDF/RSS spec was deemed 'too complex' for the 'average user'. The RDF data model itself is complex to the uninitiated, and thus the placement of certain XML elements representing arc types seemed redundant and arbitrary to some.”

So Liddy was asked to cook up something simpler, and did. That something was called RSS. Liddy's post says: “I fully expected the format to die an ignominious death, and I was pleasantly surprised to recently to poke my head out of the sand and find so many people still using it.”

Among those “many” was a developer named Dave Winer whose company created RSS publishing and consumption tools. Guha and others ushered the technology to version 1.0 in the year 2000.

All manner of argument followed, beyond the scope of this story's intention to explain how an attempt to create a virtual reality spawned a content syndication format.

Suffice to say, RSS was recognised as a very good idea and is used by a great many people today. If you automatically download new podcast episodes, use a news aggregation app or torrent files today then there the chances are there's some RSS lurking in the background giving an application a Project X factor with a nice side of hot sauce. ®