The spinning rust folk have released 4, 6 and 8TB, 3.5-inch Gold drives with a mix of technologies.

The 8TB Gold drive is a helium-filled drive for example, while other two are air-filled, suggesting that HGST tech has been used and that the Gold line represents one of the first WD-HGST technology integration exercises.

WD is not revealing the areal densities of the new drives nor the platter counts. It does tell us the drives have a 128MB cache, 6Gbit/s SATA interface, spin at 7,200rpm and support 550TB of drive writes/year over their five year warranty period. The 8TB one has a 2.5 million hour MTBF rating, while the others don't – confirming that this is not a unified range in the technology sense.

It tells us the new drives have: 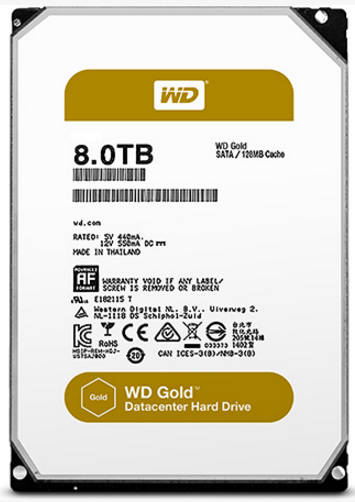 WDC says these are next-generation drives, which could imply an areal density increase. The 4TB Re is, we think, a 4 x 1TB platter drive, with the 6TB re being a 5 x 1.2TB platter design. HGST's 8TB Ultrastar helium-filled drive has seven 1.142TB platters (664Gbit/in2) and we'd assume the 8TB Gold copies this design.