What the world needs now is... not disk drives

What will industry do now we want too little of...

With PC sales falling and notebook/tablet flash use climbing the outlook for disk drive manufacturers on the desktop, sofa and kitchen table is looking bleak. They are facing a secular downward shift in disk drive demand.

The chart below shows WDC and Seagate disk drive unit shipments by quarter.

(The timescale axis has the latest fiscal Q2 being the fourth calendar 2015 quarter.)

It shows that, since the third calendar 2014 quarter, the combined disk drive unit shipment number has started falling from 122.4 million to 95.6 million just five quarters later, a 22 per cent fall.

Looking ahead, Seagate’s estimate for the first calendar 2016 quarter is 39 million units, a dramatic fall from the 45.9 million disks it shipped at the end of 2015 (final blue line entry on the chart). We don’t have WDC’s numbers yet, but expect it to show a decline for this quarter as well.

A look at WDC and Seagate’s market sector splits shows where the unit number declines are coming from.

It immediately shows us that the unit ship decline over the past five quarters comes from the desktop and notebook drive sectors, which represent the bulk of its shipped unit numbers. 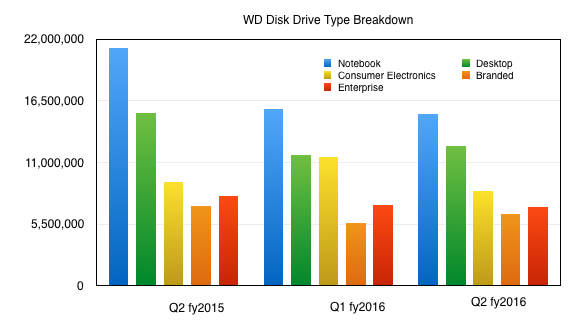 We only have three quarters of sector split numbers for WDC, and have chosen a bar chart to show them clearly. The pattern is the same, an obvious decline in notebook and desktop drive shipments, and these are the two largest sectors WDC sells into.

What’s happening in the PC and notebook markets?

First of all the PC market is declining, with fewer PCs bought. That’s why Intel has just announced a 12,000 headcount reduction. Why are fewer PCs being bought? One reason is notebook PC substitution, and another is a move away from desktop PCs by people, who are mostly data and content consumers and not creators, to tablets.

A third reason is that people prefer thinner, lighter, faster booting, notebooks, and these are having flash drives fitted instead of disk drives, which also helps prolong battery life. For the same reasons tablet computers are flash-focussed as well.

With 3D Flash coming, the flash-disk cost differential will shrink. So … there is every reason to suppose that the decline in PC sales will continue, dragging down internal desktop disk sales, and that the decline in disk use by notebooks will also continue, if not accelerate. Tablets are basically a disk-free zone and should remain so. As SSDs become cheaper, the remaining PCs will likely switch over to flash as well.

Which points lead us to this conclusion; the PC and notetop market is heading towards becoming a disk-free zone. That means WDC and Seagate face losing about 70 million and 100 million disk drive shipments a year respectively – roughly half each supplier’s current ship total.

The likely outcome of all this is that the world will need fewer disk drives for a good few quarters, until and unless enterprise and cloud capacity disk drive demand rises enough to offset the PC and notebook decline. We are therefore facing job losses and partial or whole disk drive plant plant mothballing until demand picks up. The disk drive job engine is spinning down. ®