An open source security firm has blocked a security researcher who reported flaws in a recently issued patch in an apparent fit of pique.

Hector Martin took to Twitter on Tuesday to note a trivial crashing vulnerability in a recently issued patch by Grsecurity.

“I literally crashed my box by pasting a bunch of text into a terminal, due to a really sad bug in the patch,” Martin said.

This is the fail in the @grsecurity patch. How did this pass review? ... a security patchset has code review, right? pic.twitter.com/gincZXdQrU

In response, Grsecurity acknowledged the issue, which it said would be fixed in the next release. At the same time it blocked Martin on both Twitter and by IP address.

“The proper fix (aka not yours, Mr. High Horse Captain Obvious) will be in the next patch, but good luck obtaining it,” Grsecurity snarkily responded. 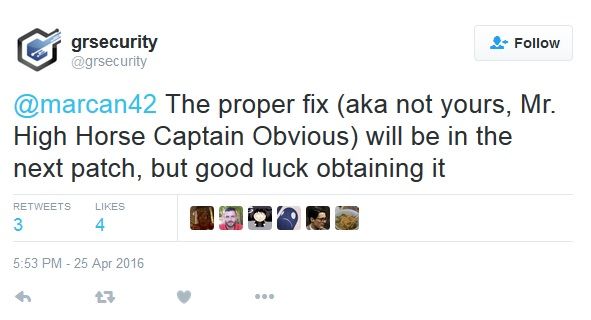 Developers later said a new patch was available, so top marks for reaction time but demerits for diplomatic fines.

Grsecurity’s technology is designed to provide security enhancement to the Linux kernel. ®