The success of Amazon's voice-controlled Echo speaker has not gone unnoticed.

At Samsung's annual Developer Conference in San Francisco, the company showcased a prototype "digital personal assistant" called Otto as a way to highlight its newest technologies.

Otto, the company was quick to stress, is a "reference design" and won't be in Best Buy anytime soon, but we spoke to one of its developers who is quite clearly hoping his team will get the green light to become "the next Alexa."

The small white device uses one of the company's Artik chips as a way to control its motion, and is a consumer-friendly way of pointing to Samsung's other technologies, including its push into the smart home and the internet of things.

Many companies pushing products for the smart home world are increasingly aware of its biggest stumbling block: clunkiness.

Yes, you can pull out your phone and turn on a light but is that really any better than simply pressing the light switch yourself? Sure, you can turn the heat up in your house while at work but, really, honestly, is it worth paying $300 to do so?

However being able to walk into a room and simply say "light on," or "it's too cold, can you increase the temperature by three degrees" without having to walk over to thermostat and input that information, well, that actually starts becoming useful.

Amazon's Echo/Alexa added a little intelligence to the voice-controlled speaker. You can ask it to do a whole range of things – play a radio station, tell you what the traffic or weather is like, tell you a joke. Nerdy tech became cozy tech. Became not having to get up from the sofa tech. 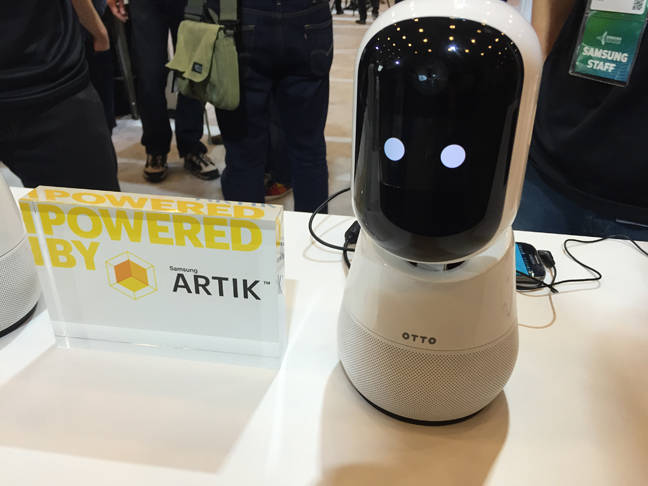 Samsung is working with Wolfram Alpha to give Otto intelligence – you can ask it a whole range of questions and get good answers. But what Samsung hopes to do is move a little beyond Amazon through the tighter integration of its (and others') technology.

Yes, you can get Alexa to turn on your smartlights but it requires several stages of communication. The smartlight company has to develop an interface and give it to Amazon. Amazon has to approve it. Then you have to enable it. And then you have to address it directly: "Alexa, turn on my WeMo light."

It works, but it's a little clunky.

The team behind Otto are working on additional intelligence. So, depending on context, or from which direction Otto hears your voice, the command "turn on the light" would turn on a range of different lights. It would anticipate what you want in the same way a real person would.

Otto also has a rotating head. Presumably this was intended to give it a little personality, but it may have practical future uses.

One of Otto's developers told us the team had been working on face and gait recognition. That would provide more context, since the machine would know who exactly is asking it a question.

It could also be used for intruder detection: if someone that Otto doesn't recognize is walking around the house, if no one else's mobile phones are in range and the front door wasn't unlocked before this new person arrived, it may be time to text Otto's owners to let them know.

This kind of technology really does start to make the smart home something practical, even valuable. ®