Chomp! Barracuda gets its bite back after turning a profit again

After five profit-free quarters they're back in the black

There was a $3.2m net profit, pleasing after five straight loss-making quarters.

Things are looking up, as BJ Jenkins, Barracuda’s president and CEO, said in his prepared remarks: “We continue to build momentum in our core focus areas and are pleased with the initial results of our efforts to capitalise on the fastest growing trends in our markets.” 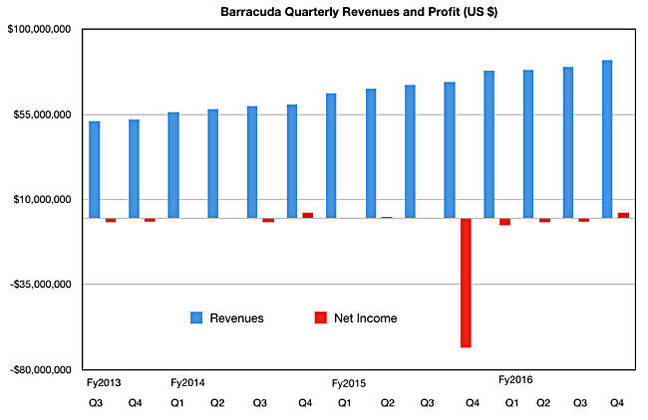 He said there were pockets of strength, “for example, the company’s next- generation firewall and virtual solutions continue to grow nicely, ” but highlighted that Barracuda’s previous business model of “delivering IT solutions at low cost and complexity to SMB customers [is] being hijacked by public cloud providers.”

Ader thinks “the fast and unforgiving nature of the shifting IT landscape has created a significant degree of uncertainty regarding the company’s growth outlook.”

But “management sees a significant opportunity going forward to help customers in the cloud gain the same level of security and archiving they are accustomed to on-premises. During the quarter, the company launched Barracuda Essentials for Office 365 (with content security, advanced threat protection, and archiving features), and has made significant headcount investments to support this initiative.”