Do all bodies in a vacuum really fall at the same speed?

Earlier this week, France's snappily-named "Micro-Satellite à traînée Compensée pour l'Observation du Principe d'Equivalence", aka Microscope, rode a Soyuz lifter to orbit on a mission to " test the equivalence principle, which postulates the equality between gravitational mass and inertial mass".

Legend has it that in around 1600, Galileo dropped a couple of spheres with different masses from the top of the Leaning Tower of Pisa to challenge Aristotle's insistence that heavier objects fall faster than lighter ones.

Whether or not that experiment ever actually took place, Galileo's suspicion was that all objects (in the same gravitational field) should fall at the same speed, irrespective of their mass, and he was eventually able to conclude that in a vacuum this would indeed be the case.

Fast forward to 1971, when Apollo 15 Commander David Scott had a nice opportunity to demonstrate that while on Earth air resistance would slow a feather's descent compared to that of a hammer, "Mr Galileo was correct in his findings":

The French space agency Centre National d'Etudes Spatiales (CNES) explains: "This is what we call the universality of free fall or equality of gravitational and inertial mass, which Albert Einstein later stated as the equivalence principle and made it the basis of his theory of general relativity."

While astronauts dropping hammers and feathers makes for fine video, such entertainment doesn't provide the degree of accuracy to absolutely test the equivalence principle.

CNES elaborates: "Although it has recently been verified with a degree of precision on the order of 10-13, this principle is nonetheless being pushed to its limits by new theories seeking to reconcile gravitation with fundamental nuclear and electromagnetic interactions, which predict that it could be violated at very weak levels.

"The Microscope satellite will probe these limits further and test the principle with a precision on the order of 10-15. In space, it is possible to study the relative motion of two bodies in almost perfect and permanent free fall on an orbiting satellite, shielded from perturbations encountered on Earth (notably seismic perturbations), over the course of several months."

At the core of Microscope is the critical T-SAGE (Twin-Space Accelerometer for Gravity Experiment) instrument, comparising two differential accelerometers, once with "test masses made of different materials (platinium and titanium)", the other with two platinum test masses, acting as a "measurement reference". 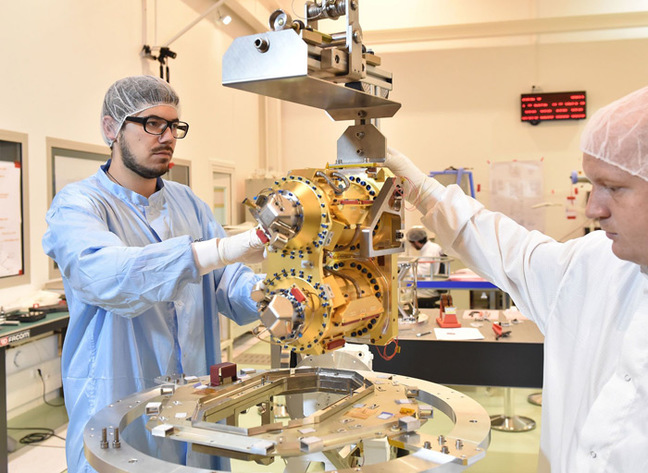 CNES says: "The mechanical part is mainly composed of two concentric cylindrical proof masses with six degrees of freedom. The functioning principle is similar for the two masses of the same accelerometer: they are controlled in the center of a cage in silica thanks to electrostatic forces (electrostatic levitation). The position and attitude variations of a proof mass, induced by a modification of the environment, are measured with capacitance detectors.

"These measurements, through control loops, generate tensions applied to electrode implanted on the silica cylinder and distributed around the proof masses which are converted into electrostatic forces that maintain its position and orientation. The measurement of the applied tensions allows [us] to derive the acceleration of the proof mass."

To keep the T-SAGE thermally and mechanically protected, it's housed in the Payload Block "cocoon" within the satellite. 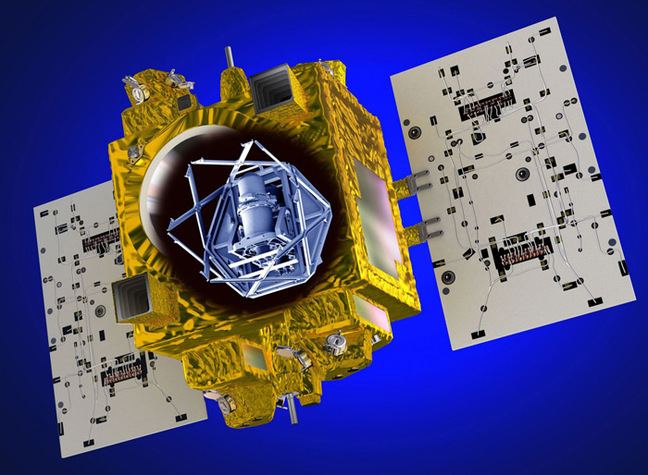 Eight nitrogen microthrusters forming the business end of Microscope's "Attitude and Acceleration Control System" (AACS) ensure the satellite is kept stable against non-gravitational forces such as "residual atmosphere and the solar pressure forces due to photon impacts", in order to achieve a purely gravitational movement".

CNES explains: "In [a] steady state, the propulsion system just balances the non gravitational forces and the test masses float nearly freely in their cages."

It remains to be seen if Mr Galileo was absolutely correct in his findings. CNES notes that if Microscope does prove a violation of the equivalence principle at very weak levels, it would be "an event that would shake the foundations of physics". ®