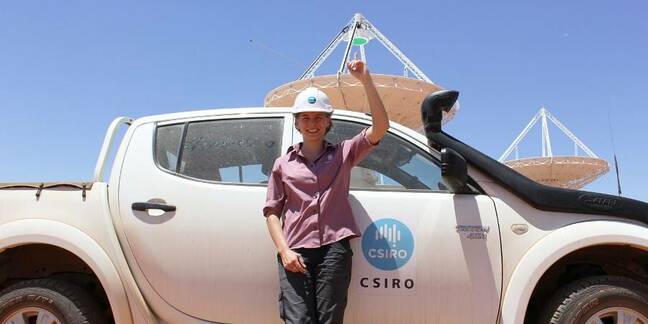 In a paper accepted for publication at the Monthly Notices of the Royal Astronomical Society, the CSIRO boffins, led by Lisa Harvey-Smith, explain that they were making observations of a well-known maser source, IRAS 20100–4156.

Their paper explains the observations were part of commissioning ASKAP's Boolardy Engineering Test Array (BETA), to test its spectral line capabilities by comparing the observations with the Australia Telescope Compact Array.

Harvey-Smith told The Register the observing run was, in essence, a calibration exercise, with IRAS 20100-4156 as a handy and well-known object: "it's quite routine – we were looking at something that had been seen before. You know what it looks like, you check against that previous result, and hopefully you see the same thing."

The surprise was the discovery that “megamaser clumps” are screaming around the centre of the galaxy at as much as 562 kilometres per second, something confirmed by the ATCA observation.

Masers, or in this case megamasers, are regions of gas that amplify microwaves in a mechanism very similar to lasers, except that instead of the waves bouncing between mirrors in a cavity, they're passing through huge regions of gas. "The infrared radiation makes the gas go into an excited state, and all of that gas then has the potential to be knocked down to its lower energy level", Harvey-Smith explained. The result: when the gas sheds the energy, it re-emits the radio waves with extra energy.

By comparison, the Milky Way's black hole is only around four million solar masses.

Why so big? The black hole was created by collision of three spiral galaxies, roughly 1.8 billion light years distant. The merger of the three galaxies central black holes provided the mass needed to accelerate the gases circling the centre.

The velocity of the megamasers is easily spotted in the emission spectrum, Harvey-Smith told The Register: the Doppler effect shows up as small "bumps" off to the edge of the main spectrum.

"You measure those peaks, and that tells us the speed the pockets of gas are moving at," she said.

From the (very high) velocity of the ring of molecules it's only a "high school equation" to work out the mass they enclose, she added. ®

'Orphan memory' could unlock more secrets hidden in our universe

Did the Earth move for you, too? Grav waves sensed from black holes' bang 1.8bn LYs away

And it has sent ripples through spacetime