US data suggests Windows 10 adoption in business is slowing

Can the Windows XP soufflé rise again and maintain its lead over Windows 8.1?

Windows 10's business push may be slowing, at least according to data gathered from visits to United States government web sites.

Each month, The Register checks out StatCounter, Netmarketshare and the US government's analytics service to see how desktop operating systems are faring in the market. All count web traffic, the latter using visits only to US government web sites. The US data is, however, the most granular of the three as it offers day-by-day assessments.

One thing to note this month is that Netmarketshare recorded a five per cent uptick for its “other” category, which means everything beyond MacOS and Windows, but doesn't offer detail for freeloaders on just what that means. Its ratings are also a a little out of kilter compared to other results, as it found a drop for Windows 7 from 51.89 per cent to 48.79 per cent. That's rather steeper than the 45.76 per cent to 44.56 per cent drop for StatCounter and the 62.36 per cent to 61.30 per cent drop recorded on US government websites, bearing in mind that the US data is share of Windows rather than share of all operating systems.

Uncle Sam's data continues to show that Windows 10 does better on weekends, but also shows that there's been a plateau in weekday prevalence of Windows 10. Here's the chart for the last 90 days. At a guess, it looks like business is slowing its adoption of Windows 10, but come the weekend there are more users to be found. 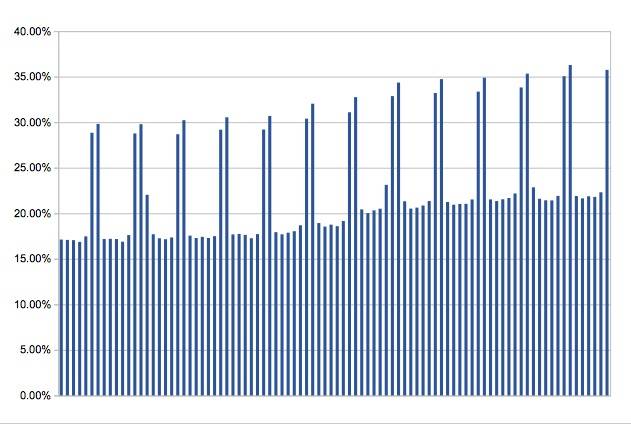 The three ratings services we consider diverge quite widely at the moment, but one irresistible result is Netmarketshare's finding that in April Windows XP's 9.66 per cent market share saw it stay ahead of Windows 8.1's 9.16 per cent. XP took the lead in December 2015, months after it was first overtaken. Surely the XP soufflé cannot rise again? ®