Takes better advantage of flash and has sub-$10k starting price

EMC's mid-range VNX/VNXe arrays have been re-engineered to make better use of flash, producing the Unity array with a starting price of less than $10,000.

It is firmly in the active:active, dual-controller mode and comes in all-flash, hybrid flash/disk, and software-only (VSA) configurations. The array is positioned as an SME and departmental array, with XtremIO (starting at $80-90K), VMAX and DSSD aimed at larger enterprise applications.

Unity can perform up to three times faster than present VNX/VNxe arrays, delivering up to 300,000 IOPS. Burton said that, with the $18k starting price, it offered better performance than Pure's //M70 at half the price.

There are Unity 300, 400, 500 and 600 hardware variants; the all-flash models have an "F" suffix, as in 300F. Like the VNX, they offer both file and block access and also have VVOL support. The basic enclosure is a 2U box with six cables coming out of the rear end. There are 2U, 25-2.5-inch drive slit expansion trays.

All the products have up to 25 Samsung 3D TLC (3 bits/cell) SSDs per tray, with 400GB, 1.6TB and 3.2TB drive capacities available, meaning a maximum of 80TB in a 2U enclosure. In August the maximum capacity should rise to around 7TB, with 15TB SSDs coming in the second half of 2017. You can imagine the consequent rises in array capacity. 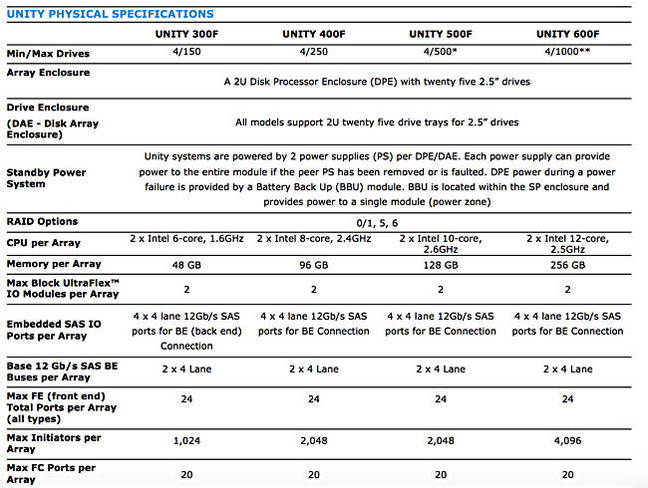 EMC compares all-flash Unity to the competition this way:

Burton said the VNX brand will sunset (fade away) with Unty becoming the mid-range brand.

VNX has been bringing over 1,000 new customers every quarter to EMC, and EMC hopes Unity will continue that trend, if not increase it.

A future Unity release will add compression, with a consequent rise in effective capacity.

This looks like a solid VNX re-engineering and upgrade effort. It's an all-flash array with up-to-date software and inherits VNX data services. The coming of compression in a future OS release will be welcomed and this, together with a doubling and then re-doubling of the maximum SSD capacity will provide Unity users with great increases in usable capacity.

The maximum 1.6PB all-flash Unity capacity will first jump to above 3.2PB, theoretically, and then past 6.4PB with the SSD size boosts coming from Samsung. Compression could more than double that, meaning total usable capacity of 13PB, maybe even 20PB.

A single 2U tray can hold 80TB now. It could jump to 160TB, then 320TB, and attain, perhaps 500TB with compression. EMC and, soon, Dell-EMC sales reps will have smiles in their faces. Hello dear customer, have I got news for you.

Get a Unity all-flash data sheet here (pdf) and hybrid product data sheet here. Unity hybrid arrays start at under $10,000 with all-flash Unity starting at less than $18,000. The arrays are available now and Unity is available in VCE Vblock and VxBlock System 350 configurations now. ®

Yes, the Chinese will never think of doing something like this, muhaha
Systems27 Jan 2023 | 6