If you run online services, concentrate your efforts on making sure they can handle iOS devices on weekends.

The Register makes that recommendation after a wade through the United States government's data on which operating systems hit its empire of websites.

The US makes that data available at analytics.usa.gov, where rolling 90-day data dumps are published. We grabbed data for February 1 through April 30, put it through the Vulture South analy-o-tronic and produced the graph below.

What you're seeing is Android, iOS, OS X and Windows, expressed as percentage of the traffic to US government websites. The data is US-centric, but about 17 per cent comes from the rest of the world. We like it because we're aware of no other publicly available data set at this scale: the US government records about two billion visits to its sites over 90 days.

We've chosen to graph only the big four, because the share for the other operating systems listed are trivial. BlackBerry's limping along at 0.1 per cent. Chrome OS has one per cent on weekdays and half that on weekends. Linux has half a per cent. Windows Phone about 0.35 per cent.

On to the graph! 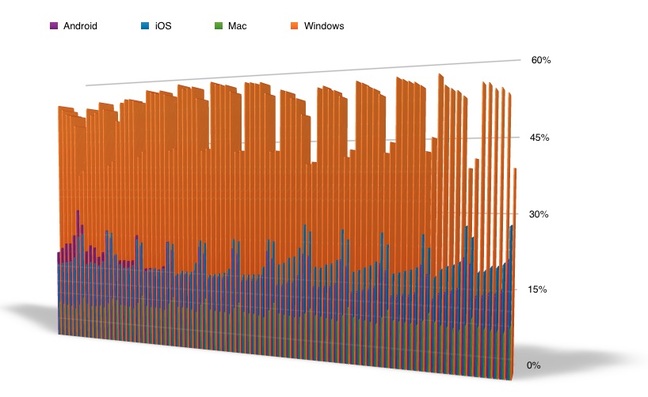 On our reading of the stats, we see the following phenomena:

We're not ruling out methodological mishaps as the reason for Android's dip, not least because we know Android's overall market share is growing. But the data does hint at interesting behavioural differences. We know that iPhone users tend to be more affluent – the devices just cost more. Sociology is not our speciality, but we'd love to know why Android users seem to be spending less time on US government websites than their Apple-wielding fellows.

We'll repeat this exercise next month, extending the data set by a month, and see what we can learn. The raw data is here, in Dropbox, should you desire. ®