Leave the spin to the quibits, please

In a troubling development today, IBM demonstrates it still hasn't quite grasped this cloud computing thing at all.

Big Blue's boffins have built a quantum-computing processor featuring five superconducting qubits, and installed it in the IBM T.J. Watson Research Center in New York. IBM is now inviting people to request access to it.

Once you're granted an account and logged in over the internet, you can, we're told, "work with the individual quantum bits (qubits), and explore tutorials and simulations around what might be possible with quantum computing," all from the comfort of your PC or tablet. That's handy for fellow boffins, we assume.

For really rather depressing reasons, though, this announcement is presented to the world and pageview-ravenous tech journos under the banner "IBM Makes Quantum Computing Available on IBM Cloud." The service is described thus:

On Wednesday, May 4, for the first time ever, IBM is making quantum computing available via the cloud to anyone interested in hands-on access to an IBM quantum processor, making it easier for researchers and the scientific community to accelerate innovations, and help discover new applications for this technology.

Really? Via the cloud? To anyone interested? Within the same breath, IBM, we've gone from "anyone interested" to "researchers and the scientific community." It's a shame IBM stopped there. One more paragraph, and we'll have whittled down the user base to just PhDs. Hop over the full-stop, and this "quantum computing experience" will be exclusively for Nobel Prize winners only. 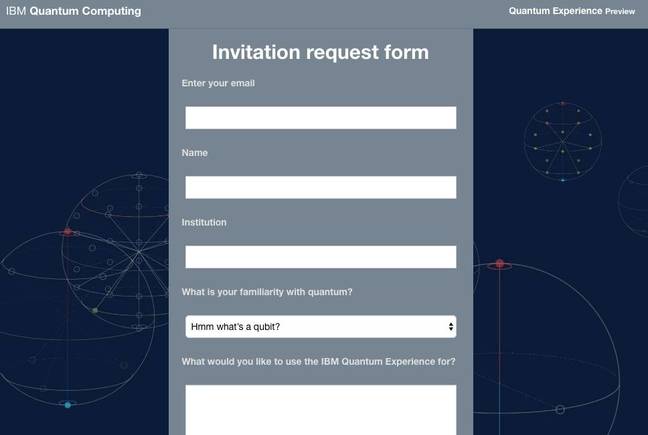 ...and fill out an invitation request. If you hear back from IBM, you're in, presumably.

IBM doesn't get it. It's not 2007 any more. The cloud today is on-demand computing, delivered virtually instantly at scale. You pick a username, you enter a password, you hand over your credit card number, you get into the service immediately. You start using it.

Since when has invitation-only limited access to scientific experiments been the cloud? How exactly do you share a five-qubit processor at scale? It's too bad Big Blue can't ask its cloud chief technology officer: he left recently, along with other top-brass and all the staffers axed in an ongoing restructuring.

Don't ask Arvind Krishna, senior vice president and director of IBM Research, either. "This moment represents the birth of quantum cloud computing," he said in a canned quote, again demonstrating that IBM Research has a totally different definition of the word "cloud" to Amazon, Google, and Microsoft.

It's IBM Watson-as-a-service all over again. Can't someone at SoftLayer or IBM Bluemix have a word?

PR spin aside, you're not going to rewrite textbooks with five qubits. In 2001, IBM scientists factored 15 into three times five using a seven-qubit processor. In 2013, physicists in China factored 143 using four qubits. In 2014, researchers were able to factor 291,311 using only 6 qubits. Your humble hack's 2.2GHz Core i5 laptop was able to calculate it instantly: 523 times 557. 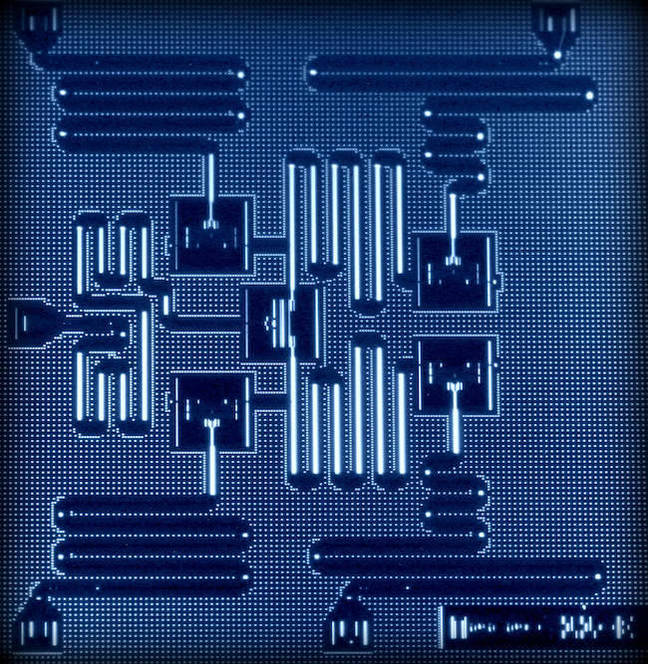 Classic computer bits are either one or zero; on or off; true or false. Quantum bits are either zero, one or a superposition of both. Quantum computers are expected to be able to process calculations far faster than classic binary bits by coupling this three-state capability with other quantum effects. It's something that's been promised for decades.

Quantum computing has a long way to go. IBM reckons 50 qubits are needed to top the fastest known supercomputers of today, and 100 qubit CPUs should be possible "in the next decade." IBM's five qubit system is a fairly big hulking thing; the brains of the processor must be kept in a cryogenic dilution refrigerator to minimize the effects of heat and electromagnetic radiation. 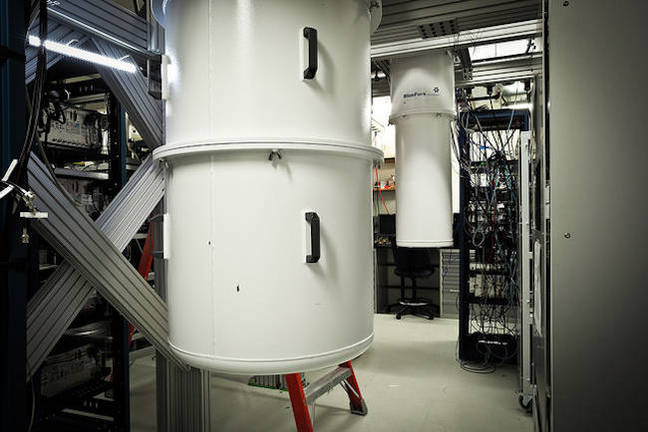 A dilution refrigerator that's home to superconducting qubits, which must be cooled to almost absolute zero ... Photo by Carl De Torres for IBM Research

Providing this kind of facility remotely to scientists is a nice gesture by IBM Research. Maybe one day it can scale. But dressing up this experimental technology right now as a quantum-computing-as-a-service free-for-all is absurd.

One tech news site declared this morning: "IBM just beat Google to a brand new type of computing." Swap computing for marketing and you're on the right track. ®