You can read Anne Frank, Julia. You just don't want to pay for it

Comment A tasteless attempt to recruit Holocaust victim Anne Frank to the case of weakening European copyright protection has backfired on the EU's only Pirate Party MP, Julia Reda.

On WIPO’s World IP Day last week, copyfighter Reda tweeted that she was “trying to read Anne Frank’s Diary” but couldn’t because of copyright terms.

Appearing on CBC, Canadian poet and head of the Writers Union of Canada, John Degen suggested that invoking a murdered schoolgirl as a cause celebrate was somewhat “tone deaf”. In a must-read Medium post, Degen explained why he sent the MEP a hard copy of the memoir by snail mail, at his personal expense. Others joined in.

Degen pointed out something blindingly obvious to everyone except the copyright crusaders: that if Anne Frank had not perished at Bergen-Belsen concentration camp in early 1945, she would be turning 87 next month. Yes, it’s a shame her eponymous diary is not out of copyright, but perhaps this is not a big deal: the book is readily available for as little as £1.99 (Kindle edition) and the proceeds go not to some corporate bank account, but to the Anne Frank Foundation, a charity that amongst other good deeds, provides medical assistance to Holocaust survivors. It’s rather more of a shame she isn’t alive to bear witness to the horrors of those times.

Reda was being misleading when she said she couldn’t read Anne Frank’s Diary – what she meant was that she didn’t want to pay for reading it. Reda refused to discuss the story with Degen on CBC, and blocked the poet on Twitter. So much for open government. 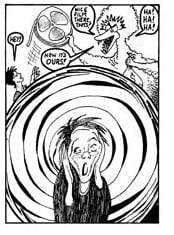 Cartoon from the comic book, which is licensed under Creative Commons Attribution-NonCommercial-ShareAlike.

Degen highlights Reda’s imaginary persecution complex in contrast to the genuine persecution of an author – which is not a comparison that’s flattering to the copyfighters.

This bogus persecution complex is nothing new, as we’ve noted many times before. The iconography of persecution saturates anti-copyright discourse. It’s almost as if copyfighters can’t get themselves out of bed without being motivated by this sense of burning injustice. Anger is their fuel.

On the left is an illustration from a book written by Professor James Boyle of America's Duke University, who specialises in promoting “competing approaches to copyright”, channelling mental illness for a 2006 comic book. Are the voices in your head driving you mad? Copyright laws made them.

Here’s Cory Doctorow in 2010, conjuring “militias” out of thin air: 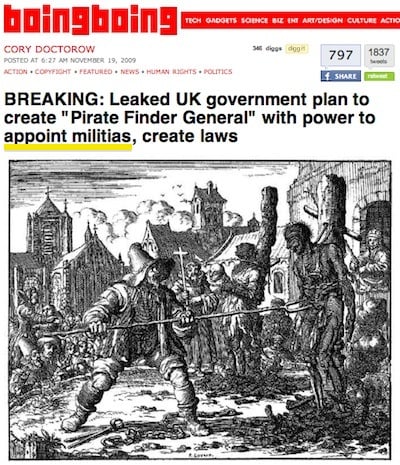 That looks painful. Reda herself continues in that tradition, with barbed wire, locks and barriers:

And in case you missed the point, more Reda: 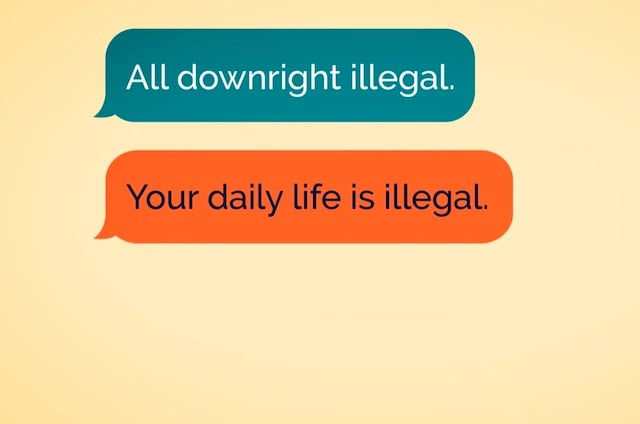 Consider how central the need to feel persecuted is so central to the anti-copyright activists. Even ten years ago, the copyright reformer might have used the discourse of “spreading knowledge”, or “bringing light to the heathens” to justifying changes in copyright law, but now it’s barbed wire all the way. Why would this be?

Perhaps the activists work so hard at maintaining the persecution complex because the reality of digital copyright invites us to draw a different conclusion.

Today, giant corporations like Facebook and Google harvest the individual's work – they’re media companies that use everyone else’s “media” (including yours and mine). Little or no value is returned to the author from the plantation's giant advertising and data harvesting operations. Digital copyright is honoured more in the breach.

Yes, copyright terms have got longer, but the protection, which makes the term meaningful, is non-existent. Nominal terms may as well be 1,000 years, for in reality copyright lasts about five seconds. That’s about how long it takes for your work to be ripped off. Yet every mention of copyright someone will be bleating about terms – and how hard done by we all are.

Copyright was invented to prevent unauthorised exploitation by a more powerful corporate entity, so the solution probably lies not in weakening the individual’s rights, but strengthening them.

Instead of adjusting their politics to the reality of Facebook and Google, the activists have become trapped down an intellectual cul-de-sac, and have to adjust reality to their politics.

Perhaps we need some sort of support group. ®

Authoritarian regimes hate copyright, which is an Enlightenment idea that the individual should own and control their work. For state socialist and fascist regimes this is an anathema: the state should decide; the collective knows best. Pirates owe more to fascism than they are prepared to admit.

As Pirate MEP Reda would know, if only she had read more widely, German romanticism contributed enormously to this emancipation of the individual, and in Germany today you can’t even assign ownership of your work to somebody else. Now there’s a subversive idea.