Boaty McBoatface not entirely sunk, though

The Natural Environment Research Council (NERC) has announced that its shiny new £200m, 15,000 tonne polar research ship will be named RRS Sir David Attenborough, in honour of the Brit naturalist and broadcaster. 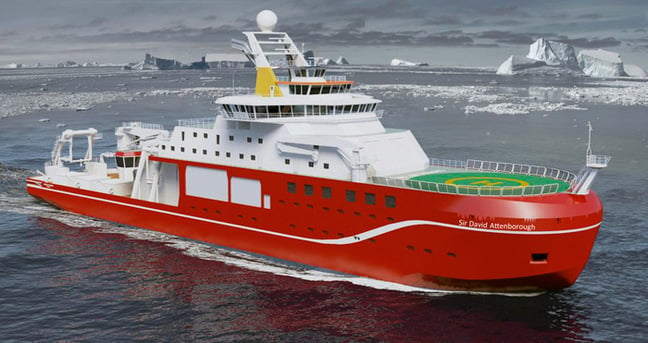 While a public vote overwhelmingly came down in favour of dubbing the vessel "Boaty McBoatface", NERC and science minister Jo Johnson torpedoed that particular piece of maritime tomfoolery.

Johnson diplomatically said: "The public provided some truly inspirational and creative names, and while it was a difficult decision I'm delighted that our state-of-the-art polar research ship will be named after one of the nation's most cherished broadcasters and natural scientists.

"This vessel will carry the Attenborough name for decades to come, as it fulfils its mission to explore the oceans and put Britain at the forefront of efforts to preserve our precious marine environment."

Boaty McBoatface isn't entirely scuppered, though, because as a sop to the unwashed masses, the name will be used for a a "high-tech remotely operated undersea vehicle" aboard the good ship Attenborough.

The man himself (Attenborough, not McBoatface) said he was "truly honoured" by the decision. He told the BBC: "I have been privileged to explore the world's deepest oceans alongside amazing teams of researchers, and with this new polar research ship they will be able to go further and discover more than ever before."

The RRS Sir David Attenborough will be constructed at Merseyside shipbuilding yard Cammell Laird, and is due to enter service in 2019. ®