Gartner waves for everyone to join its hyperconverged bandwagon

Comment Gartner is telling its enterprise IT followers that hyper-converged systems are okay to use, and set to develop into composable micro-services infrastructures by 2020.

The report, entitled, "Prepare for the Next Phase of Hyperconvergence," defines a hyper-converhed infrastructure system (HCIS) as a platform offering shared compute and storage resources (note that networking is not mentioned) based on software-defined storage and compute (meaning server virtualisation), commodity hardware and a unified management interface.

We see that as combining converged infrastructure (CI) products, like EMC's Vblocks, CI reference architectures like Cisco and NetApp's FlexPods, and what the rest of the industry calls hyper-converged infrastructure, because it further integrates the storage, compute and network compinents into a single box or appliance (HCIA) as pioneered by startups such as Nutanix and Simplivity.

HCIS is said to represent a near-$2bn market this year and will grow to almost $5bn in 2019, accounting for 24 per cent of the overall systems market. Its use will be mainstream in data centres in 2020.

That growth is shown compared to integrated systems (like Vblocks) and reference architectures (like FlexPods) in a chart: 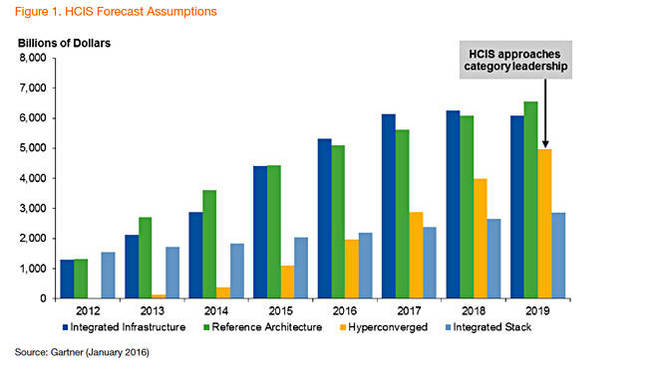 In 2019 the hyper-converged segment has grown faster than the other segments since 2015, with integrated stacks languishing. Reference architecture converged systems eventually overtake Vblock-like CIs but both see slowing growth rates in 2017-2019 compared to hyper-converged.

Up until now, the Gartnerites say, HCIS use cases have been limited, causing silos separated from the existing infrastructure. Its progression will be dependent on multiple hardware and software advances, such as networking and software-defined organisations.

They plot out a landscape within which CIs, HCIS and related systems evolve over time: 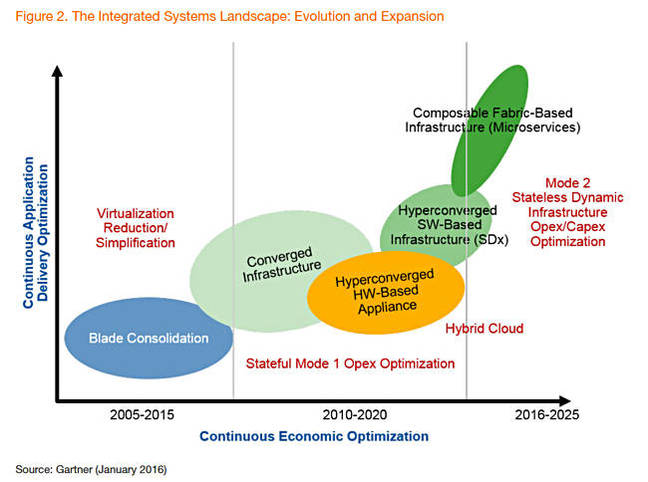 This needs a little explanation. The three time periods are straightforward but the vertical axis, labeled “Continuous Application Delivery Optimization” is not. It means, the Gartnerites say; “the degree of maturity in attaining continuous application delivery,” continuous meaning speed and flexibility. It represents the time to set up, provision, deploy and enhance configurations and services with quality of service.

“Continuous Economic Optimization,” the horizontal axis, means the revenue and profit outcome of deploying the systems.

The three time periods, which overlap, are a phase 1 characterised as Virtualisation Reduction and Simplification in the blade era, then OPEX optimisation in the middle, phase 2, 2010-2020 decade, which passes through Hybrid Cloud onto a Stateless Dynamic Infrastructure period with both OPEX and CAPEX optimisation.

It is this third era, phase 3, which shows the evolution of HCIS into continuous application and microservices delivery on HCIS platforms (2016 to 2025).

Phase 3 systems have disaggregated and modular compute, storage and network components that can be combined – composed is the term du jour – dynamically by software to provide HCIS platforms on which to run apps in VMs or decomposed themselves into containerised micro-services. Gartner says this will drive "continuous application delivery and continuous economic optimisation."

They promise that "ultimately, the underlying infrastructure will disappear to become a malleable utility under the control of software intelligence and automated to enable IT as a service to business, consumer, developer and enterprise operations."

This progression will depend upon hardware and software developments, including networking and the grandly-named software-defined enterprises.

The Gartner Prepare for the Next Phase of Hyperconvergence report is available for $495 to registered Gartner users. ®