Spanish police have traced and cuffed a driver who live streamed a Madrid ring road burn-up during which he hit 195km/h (121mph) and narrowly avoided taking out several other vehicles.

The unnamed speed merchant used Periscope to transmit his night-time high-speed exploits, then ill-advisedly shared the footage on his Twitter account, along with other video of himself consuming narcotics.

Concerned citizens reported the material to the National Police, whose technical investigators identified the perp via his online presence. He was arrested in the Madrid suburb of Rivas-Vaciamadrid, El Mundo reports.

The police operation was the first in Spain prompted by Periscope material, the paper notes. The offending footage showed the cuffee "driving at double the speed limit and performing reckless manoeuvres forcing other drivers to get out of his way in order to avoid a collision".

*"Periscope" not a verb, you cry? It is according to Spanish cops, as evidenced by this use of the imperfect indicative form of "periscopear": 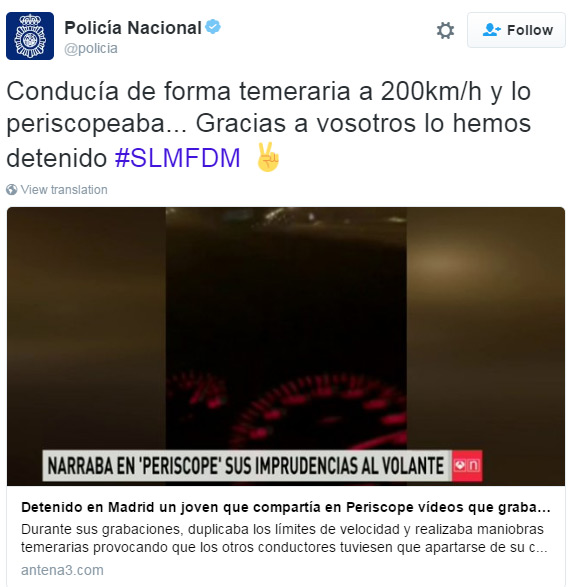 Uber sends its self-driving cars on a road to nowhere, with indefinite stop at automated truck aspirant Aurora

The top three attributes for getting injured on e-scooters? Having no helmet, being drunk or drugged, oddly enough

First world problems, with a big scoop of utter stupidity

After intense scrutiny, Zoom tightens up security with version 5. New features include not, er, spilling video calls to network snoops

As recommended by Peter Thiel