Tintri has made a triple-play for its future with enlarged flash capacity, the addition of scale-out and predictive analytics so customers never need get surprised by space running out.

The three existing T5000 all-flash arrays now use Samsung 3D V-NAND SSDs, the ones with TLC (3bits/cell) flash, and their raw capacity has risen, with three varying capacity configurations for each of the T5040, T5060 and T5080 products.

Raw capacity is effectively increased through dedupe, compression and zero block optimisation data reduction technology, with the T2040’s 6TB becoming 17TB through a 2.83:1 ratio. The top-end T5040 gets a 77TB effective capacity from 23TB of raw capacity through a 3.3:1 reduction ratio. All three products come in 2U enclosures – meaning 20 in a fully populated rack.

The system scales out from a single entry-level T5040 with 17TB of effective flash capacity to 10PB, which would mean 32 x T5080s in a single and loosely coupled scaled-out system, not quite two racks worth of kit. A 10PB system is said to support 160,000 virtual machines and deliver 6.4 million IOPS at less than $1/GB (effective GBs not raw GBs).

A table shows the raw and effective capacities for the new products, plus some other numbers. We think the number of VMs and vDisks at each capacity configuration point per T5000 product will vary but Tintri doesn’t show numbers indicating this.

A comparison of the previous T5000 configurations with the new ones shows how the raw and effective capacities have changed;

Charting this gives a visually quicker way of understanding the changes: 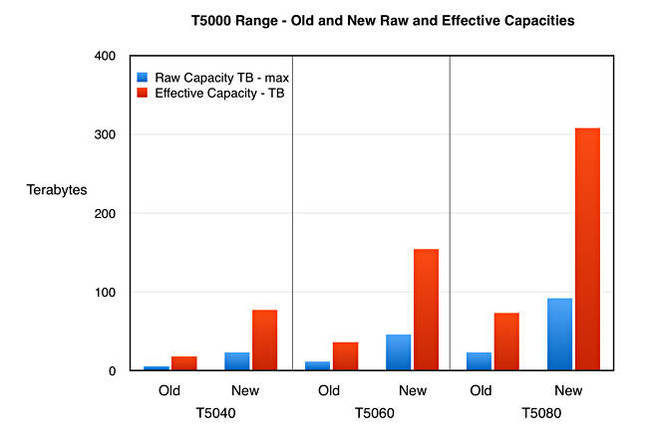 The number of supported virtual machines (VMs) doesn’t change on Tintri’s data sheet although, El Reg suggests, given the large increases in effective capacity, that might be understating what you might find in your data centre.

A cluster of T5000s, both all-flash and hybrid, is treated as a single federated pool of storage, with the nodes inter-connected by 10 Gbit Ethernet. The scale-out functionality comes from a new release, v4.2, of the Tintri operating system. Its functionality includes Ethernet failover link aggregation, VLAN tagging, IP aliasing, and LACP.

This software collects stats on running VMs accounting for peak loads. Tintri says stats are collected every 10 minutes from 30 days of history and analytics routines then look at these stats. They identify VMs that are growing rapidly and model their growth so that VM admins can see what's happening with space usage.

The system provides least-cost optimisation using multi-dimensional modelling for the VMs running in the T5000 VMstore systems and makes VM placement recommendations to optimise storage pool use. This takes into account space savings, resources required by each VM, and the cost in time and data to move VMs from one node to another.

When VMs move from node to node, so too do the snapshots, statistics, protection and QoS policies, using a compressed and deduplicated replication protocol.

Tintri says you need less than a single full-time employee to manage a 10PB T5000 cluster.

The company is offering predictive analytics as a service (SaaS) so that customers can model Tintri VMstore capacity and performance. This new version of Tintri analytics uses Apache Spark and Elastic Search and looks at statistical data from hundreds of thousands of VMs over several years. 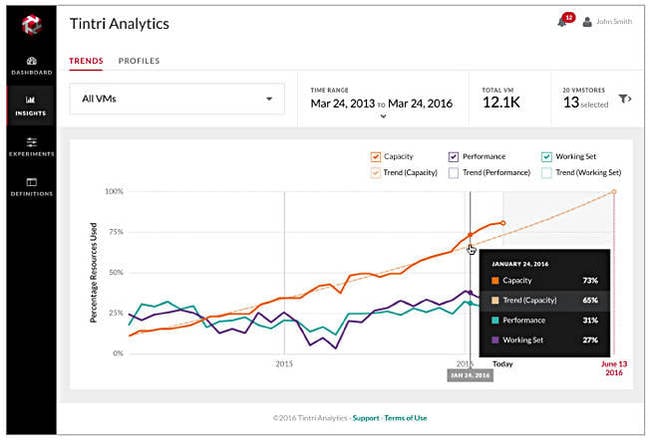 Tintri analytics screenshot showing how usage of capacity, performance and working set have been trending over time, and when you can expect to run out of these resources; i.e., June 13, 2016 with capacity all used up.

You can model storage needs up to six months into the future based on up to three years of historical data. The system shows live resource usage, average consumption per VM and the types of applications that are the largest consumers of capacity, performance and working set capacity.

A Tintri customer said, as an example: “If an internal stakeholder wants to add 100 SQL servers, I can tell them in less than one minute whether or not we can support it, and understand the impact on our resources."

There are two multi-system offerings: the Foundation Cloud and the Ultimate Cloud, Tintri likening deployment of its boxes on-premises to deploying a private cloud.

The Foundation Cloud has 1.2PB of effective storage in eight rack units while the Ultimate Cloud has 10PB effective in 64 rack units. That’s the top-end config that supports up to 160,000 VMs, delivering more than 6.4 million IOPS, jumping burning buildings and making Hyperloop look slow.

Tintri started out as a VM-aware and VM management-focused hybrid flash/disk array shipper, providing VVOL-equivalent functionality before VVOLs came from VMware and were adopted by the storage array community.

It was one of a trio of hybrid array startups – the others being Nimble and Tegile – offering better and more cost-effective hybrid array performance than the mainstream incumbent suppliers. It has always had an edge in its support of VM admin-focused array management and the original VMware support has been broadened to include Hyper-V, OpenStack, Red Hat and Xen hypervisor support.

The incumbents have improved their hybrid array game and strengthened their all-flash array offerings as well as supporting VVOLs. Tegile, Tintri and Nimble have also introduced all-flash arrays and Nimble has IPO’d, leaving questions about how and when – and even if – Tegile and Tintri could IPO, and what that means for their future.

With this announcement Tintri has added a scale-out facility, meaning its customers can grow a Tintri deployment to 10PB of capacity, boosted all-flash capacity and set the scene for capacity doubling and re-doubling in the future, as it follows Samsung’s 3D SSD growth curve. And it has provided a super-sleek and powerful interface and analytics SaaS function for VM admins to manage and extend the Tintri array’s resources as the workload grows.

The new T5000 is simply a better mousetrap than the old T5000, and Tintri’s existing customers should lap it up. Prospective ones can find interest in it too. Tintri's channel will be knocking on lots of new doors, and it just made life harder for its competitors. ®

What? Why? This one’s all about an eleven-month window of client complications

Says its sales are up (though they'd have to be, right?)

SEC filing shows company up the creek and sans paddle