University of New South Wales boffins have laid hands on another record, with a solar cell demonstrating 34.5 per cent conversion efficiency.

The work was carried out by Dr Mark Keevers and Professor Martin Green, who heads up the university's Centre for Advanced Photonics.

It's the kind of result that would get Olympic officials screaming for a drug test: the previous efficiency record for a cell working with unfocussed sunlight was just 24 per cent.

Focussed light solar cells are still more efficient, delivering a sun-to-electricity conversion efficiency of 40 per cent, but are more costly to produce.

A simple prism - the device that led Isaac Newton to theorise about the nature of light based on the colours he found in sunlight - is the basis of the demo. The Keevers/Green work used a four-junction module 28 cm2 in area, embedded in a prism.

The prism splits the light into four wavelength bands, and a triple-junction cell on one face targets each band in different layers combining indium-gallium-phosphide; indium-gallium-arsenide; and germanium.

A silicon cell is installed on another face of the prism, to capture energy from the infrared portion of sunlight. As the illustration below shows, the bands are tuned to capture photons at energies of 1.1 electron-volt (eV), 1.88 eV, 1.41 eV and 0.67 eV. 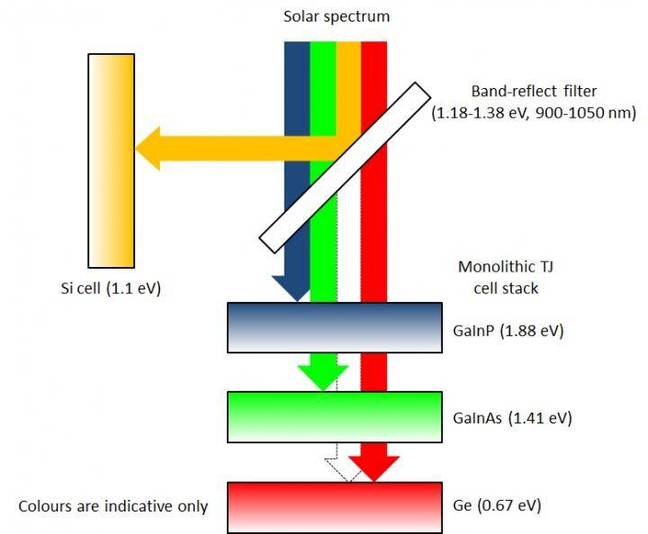 The previous record for unfocussed sunlight was set by American company Alta Devices, which hit 24 per cent efficiency, but over the much larger surface area of 800 cm2.

The design can also be scaled up, albeit at the cost of some loss interconnecting multiple modules together, but in the university's announcement, Keevers says further efficiency gains are feasible.

He pegs the theoretical maximum efficiency of the four-junction technology at 54 per cent.

In the short term, manufacturing costs mean the beam-splitting approach is more likely to turn up in commercial-scale kit such as the heliostat technology being developed by RayGen and others. ®