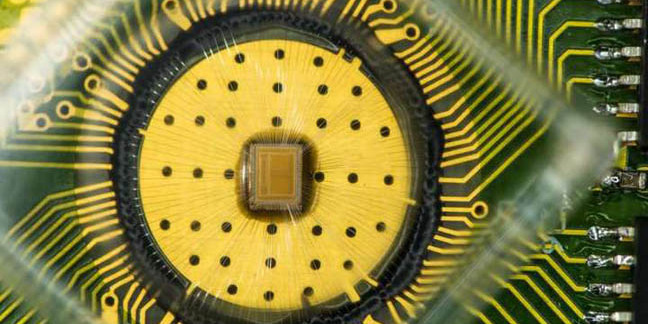 IBM has claimed a significant break through in phase-change memory which could potentially replace DRAM.

Researchers at IBM say they have successfully managed to store 2 bits per cell in a chip employing a strip of 64,000 cells at some toasty temperatures and while under quite a bit of stress "for the first time ever".

Multi-level-cell technologies and PCM had been inhibited in the past by the sheer variability of the cells, background noise and changing resistance.

But IBM's boffins claim to have achieved what they've called "reliable" storage and "moderate" data retention on 2 bit cell PCM on the 64,000 array at "elevated" temperatures and following on million set/reset endurance cycles that measure the writing and re-writing of data.

They claim that under "similar operating conditions" they have shown the "feasibility of 3 bits/cell PCM, for the first time ever."

Haris Pozidis, manager of non-volatile memory research at IBM Research in Zurich, in statement called the work "a significant milestone."

"At this density the cost of PCM will be significantly less than DRAM and closer to flash," Pozidis said.

PCM promises to have many advantages over current storage memory methods. By storing 2 bits per cell in the device that had 64,000 cells, scientists showed that PCM was a faster, more stable and more endurable way or storing memory.

It also means that a greater amount of memory can be packed over a tighter space, making it useful for mobile phones and devices in Internet of Things.

The chip is made from a type of chalcogenide alloy that contains a mix of sulphur, selenium or tellurium. When a big enough current is applied, the material’s phase changes from an amorphous state to a highly ordered crystalline state and its conductivity increases.

Memory is written to the device through the phase change. Switching between two states represents flipping a bit from 0 to 1 or vice versa, working similarly to other memory cells that use binary to encode memory. The memory can be read after a small voltage is applied.

Unlike DRAM, PCM doesn't discharge over time causing the memory to fade. Once the phase change has happened the information stays locked inside even when the power is turned off.

The device is expected to handle at least 10 million write cycles, much more than a typical USB flash drive which fizzles out after 3,000 write cycles.

IBM hopes to use PCM as a standalone method or used in hybrid applications to boost flash storage.

Its fast speed means that it could be used to store a mobile phone’s operating system, enabling it to launch in a few seconds. Other examples include storing entire databases in PCM to process time-critical online applications, such as financial transactions and increasing the speed of algorithms in machine learning.

God DRAM you! Prices to slide more than 40% in 2019 because chip makers can't forecast

When the chips are down: trade tussle with Japan yet another reason for pessimism