Google has been granted a patent on a system that would adhere victims of car strikes to the vehicle for their own safety.

US Patent 9,340,178 describes a substance that would be hidden under a protective layer, only to be exposed on impact to adhere pedestrians or crash victims to the car rather than tumbling to the pavement.

The aim, say the inventors, is to reduce the risk of a "secondary collision" in which a stricken pedestrian could be thrown over or to the side of the car and endure additional injuries from the fall.

According to the patent, the sticky surface would be exposed only in the event of a collision. A top coating applied to the hood and bumper of a car, separated by an air gap, would be sheared away by the impact to expose the adhesive.

"Upon impact with a pedestrian, the coating is broken exposing the adhesive layer," the patent filing reads. 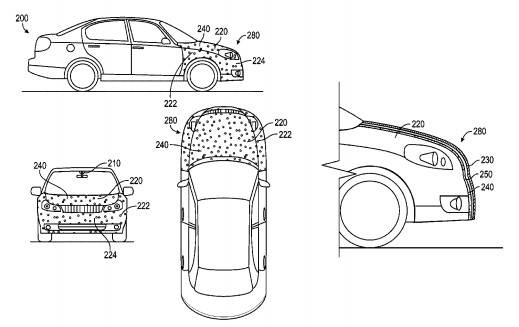 They'll hit you, glue you to the car, and drive away. And if you're lucky, they'll do it in that order

While the patent notes that the adhesive could work on any automobile, the filing specifically notes on multiple occasions that the adhesive would be particularly useful for "autonomous or semi-autonomous" cars, such as the ones Google currently has in development. While largely successful, the trials have resulted in one high-profile fender bender with a city bus earlier this year.

The patent application was filed on November 12, 2014, and a US Patent was granted on May 17 of this year. Listed inventors are Alex Khaykin of San Francisco and Daniel Lynn Larner of San Jose, both working for Google in Mountain View. ®