It'll be HTML 5 or nothing real soon now, vAdmins 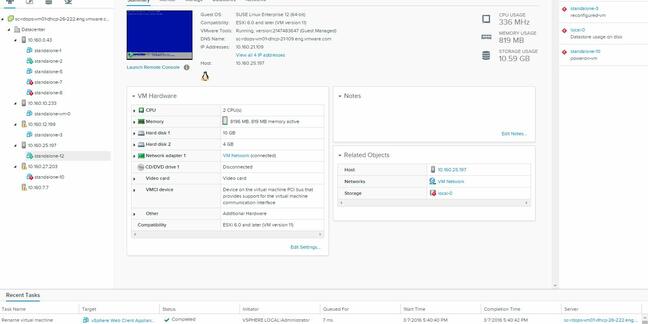 vAdmins will soon have just one graphical option with which to operate vCenter, after VMware decided to can its Windows client and replace it and other current tools with a single HTML 5 client.

VMware's blog announcing the move points out that it's already adopted HTML 5 for several other products, but has held back on vCenter because it's a big job. That job was partly completed in March 2016, when the company released an unsupported experimental HTML 5 client. That code, it now turns out, was really a beta for the real thing as VMware now says “we plan on bringing this product into a supported release soon.”

With a vSphere beta under way, The Register's virtualisation desk is happy to suggest the client will debut in a new version of vSphere to be released in late August at VMworld North America.

The move to HTML 5 for the web client is no surprise. Dropping a Windows client was less expected. VMware says it's done it because “updating the Desktop client would have required a huge investment” that would have drained resources needed to make the HTML 5 client.

“We decided to focus on bringing the new vSphere Client (HTML 5 based) up to speed as fast as possible, simultaneously offering a great user experience and getting off of Flash,” wrote VMware's senior product manager Dennis Lu.

VMware will continue to support its current web client, which sysadmins generally loathe, “for some uncertain period.” The delay is down to the time required for third-parties to port their Web client plugins to the new HTML 5 client. ®