And with possible job cuts looming in 2017, how about money – can they print money?

Take one of HP Ink's new and expensive 3D printers, and you can print out half of the components needed to build another one, CEO Dion Weisler said on Wednesday.

"Fifty per cent of the bill of materials of our 3D printers are printed by our 3D printers," Weisler told analysts on a conference call El Reg tuned into.

"So our printers are printing themselves. It’s a perfect example of short-run manufacturing. We’re not doing this to make a point, we’re doing this because it’s more economically advantageous to print these products in 3D than it is to use traditional manufacturing."

Weisler was extremely enthusiastic about his new printers, describing them as "incredible innovation." SpaceX was not available for immediate comment.

If only these 3D printers could literally print money for HP – kinda like in the old days, when people still used paper and printers knocked back ink cartridges as fast as bankers drained London's champagne bars on a Friday night. (And compared to the ink, the champagne was cheaper, too.) 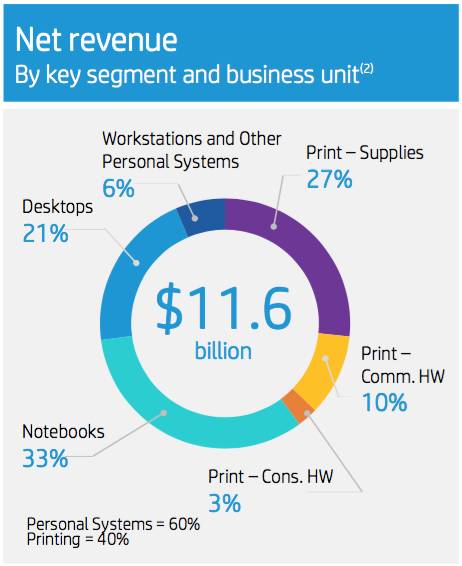 HP Inc – the half of Hewlett Packard split that drew the short straw and sells PCs and printers – could do with the dosh, given the financial figures it published yesterday. With declining sales across the board, a change in tack is needed.

If HP Ink were a brewery, it would be telling investors: "We're not advertising how hoppy our ale is, we're telling people how marvelous it is to be drunk."

Here's a roundup of HP Ink's figures for the second quarter of 2016, which ended on April 30:

Weisler said his company is "on track to reduce our cost structure by more than $1 billion in 2016," adding that 1,200 people have lost their jobs at the business in the past twelve months. Chief financial officer Cathie Lesjak said "approximately 3,000 people will exit by the end of the year" as part of the layoffs announced in 2015. At least 800 were shown the door in the second quarter alone. More cuts may follow in 2017.

"We are continuously seeking efficiencies and we believe there are incremental actions to take beyond this fiscal year," she warned.

As for later this year, Lesjak continued:

We expect year-over-year revenue declines to moderate for personal systems and printing. Also in printing, the progress we are making on our cost structure as well as some price disciplines gives us the opportunity to place more units. Hardware unit declines will moderate, although we still expect low double-digit declines year-over-year.

Supplies revenue, in constant currency, will continue to decline, but is still expected to stabilize by the end of 2017. Productivity initiatives and accelerated restructuring actions across the company are expected to improve overall profitability as compared to the first half of the year.

Finally, Weisler isn't keen to spin off his PCs or printers divisions a la Hewlett Packard Enterprise hiving off its enterprise services to CSC: "As far as our major franchises go, we're very committed to both our PC and printing portfolios," he told investors.