As US court bans smart meter blueprints from public, sysadmin tells of fight for security info

He wanted records – and got sued instead amid terror fears 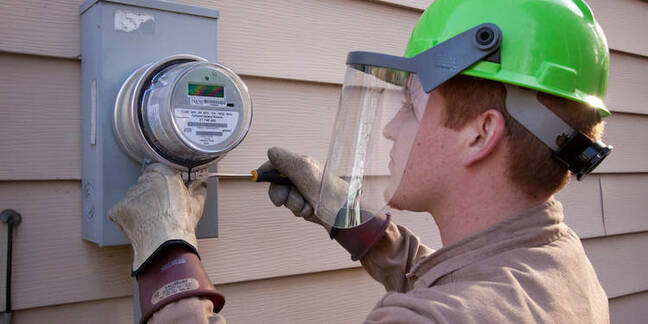 Electrifying ... A probe into a smart meter roll-out blew up into a legal spat (Photo source)

The sysadmin-activist at the center of a bizarre legal battle over a smart meter network in Seattle, Washington, says he never expected a simple records request to turn into a lawsuit.

Phil Mocek told The Register that when he asked Seattle City Light, a public power utility, to provide details on the designs and rollout of its smart power meter grid, he was simply hoping to find out what security safeguards the city and hardware providers Landis+Gyr and Sensus USA planned to use.

"We all assume these meters simply monitor the amount of energy usage in the home," Mocek explained. "But they monitor it in real time in ways that other meters did not."

The worry, Mocek said, is that the city may have been convinced by the suppliers to install a network with poor security protections or insecure protocols that could place citizens at risk of having their energy-use remotely spied on or their personal information stolen.

To find out more about the meters that the city was planning to install and the security measures in place to protect those meters, Mocek filed a request for documents under the Washington Public Records Act (PRA) via the MuckRock investigations website.

This, says Mocek, is where things started to get real odd.

The free-software advocate said that after an email exchange with Seattle City Light officials, he obtained some of the records and uploaded them to the web – only to be told that the smart meter suppliers objected to the release of the information on the grounds that the unredacted documents would disclose their trade secrets and open the public to terrorist attacks on their infrastructure.

Mocek was given a mix of unredacted and redacted documents by the city, the meter makers complained, whereas he should only have received and published files they had censored. Seattle officials said they were not skilled enough to know for sure which parts to redact, so left it to the suppliers to edit the files – yet, unredacted information managed to make its way into Mocek's hands and onto the internet.

Landis+Gyr and Sensus promptly sued the city, Mocek and Muckrock, and filed for an injunction: ultimately, the suppliers wanted the documents taken down, and the unredacted copies banned from public view.

On Thursday, a temporary restraining order was granted by the King County Superior Court in Washington – and Muckrock founder Michael Morisy confirmed the unredacted documents have been taken down pending the outcome of the case.

The legal showdown has also attracted the attention of the Electronic Frontier Foundation (EFF), which says it will lend their legal expertise to MuckRock's defense.

"We are incredibly grateful for the support of the EFF, our users and readers, and the many individuals and organizations that reached out with support and advice," MuckRock founder Michael Morisy said.

Mocek says he has yet to be formally served court papers. He argues that he has no interest in exposing the trade secrets of the smart meter providers nor the nitty-gritty financial details of the companies that are working with the city. He even said he was willing to accept documents with sensitive areas redacted.

Crucially, though, he wants those redactions to be made by the city to remove data it is required by law to censor – rather than information the companies themselves don't want to share.

"I'm not likely to put up a fight over the line item cost, but I do want to know what kind of security they have on this system," Mocek explains. "I'm worried that we as a city are going to pay a lot for a system whose security relies on people not knowing how it works."

In the meantime, however, Mocek also has some additional problems to deal with, thanks to the legal wrangling. Though he has filed similar information requests in the past, he says he has never had to face a lawsuit simply because he wanted to look at public records and keep a local utility honest.

"I don't think [Seattle City Light] are going to put a device on my house to spy on me," he quipped. "I think they are being bamboozled by vendors who want to make a lot of money by replacing thousands of meters."

As well as a restraining order, the meter makers are demanding damages for the publication of the unredacted blueprints, and are asking for a list of everyone who downloaded the dossiers. ®