NASA has announced three more CubeSats which will travel on the first mission of the Space Launch System (SLS), slated for lift-off in 2018.

A total of 13 CubeSat berths are available aboard Exploration Mission-1 (EM-1), which is primarily intended to dispatch an Orion capsule "to a stable orbit beyond the moon to demonstrate the integrated system performance of Orion and the SLS rocket prior to the first crewed flight".

The space agency selected the first seven diminutive passengers earlier this year, including the "Lunar IceCube", designed "to search for water ice and other resources from above the surface of the moon", and the "Near-Earth Asteroid Scout", aka NEA Scout - "a robotic reconnaissance mission that will be deployed to fly by and return data from an asteroid representative of NEAs that may one day be human destinations".

NASA has now confirmed that the seven will be joined by the University of Tokyo and Japan Aerospace Exploration Agency's (JAXA) truly acronymtastic EQUULEUS (EQUilibriUm Lunar-Earth point 6U Spacecraft) and OMOTENASHI (Outstanding MOon exploration TEchnologies demonstrated by NAno Semi-Hard Impactor).*

NASA explains: "EQUULEUS will help scientists understand the radiation environment in the region of space around Earth by imaging Earth’s plasmasphere and measuring the distribution of plasma that surrounds the planet. This opportunity may provide important insight for protecting both humans and electronics from radiation damage during long space journeys. It will also demonstrate low-energy trajectory control techniques, such as multiple lunar flybys, within the Earth-Moon region."

OMOTENASHI will "demonstrate the technology for low-cost and very small spacecraft to explore the lunar surface". There are no further details from either NASA, JAXA or the University of Tokyo apart from a crude graphic, but the thing appears to be a lunar lander cushioned by a couple of inflatable orbs. 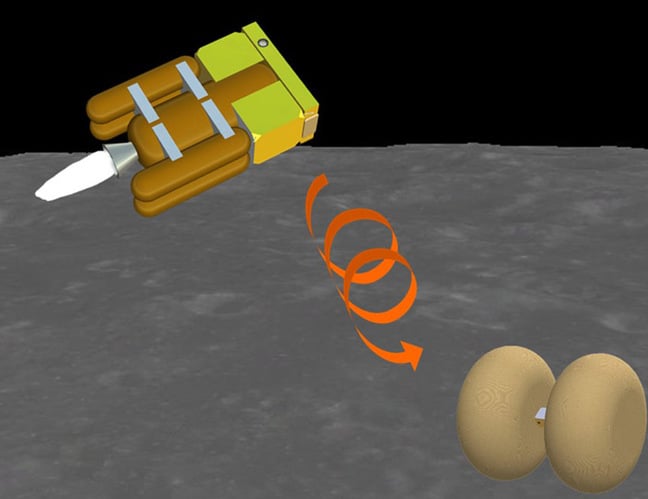 The European and Italian space agencies, meanwhile, have secured themselves an SLS ticket with the "ArgoMoon" CubeSat, having made no effort with the name beyond taking part of the moniker of manufacturer Argotec and tacking "Moon" onto the end of it.

NASA says: "ArgoMoon will demonstrate the ability to perform operations in close proximity of the Interim Cryogenic Propulsion Stage (ICPS), which will send Orion onto its lunar trajectory. It should also record images of the ICPS for historical documentation and to provide valuable mission data on the deployment of other Cubesats. Additionally, this CubeSat should test optical communication capabilities between the CubeSat and Earth."

To finally firm up the EM-1 CubeSat manifest, NASA needs to determine the three winners of the ongoing Cube Quest Challenge, who'll be announced in February next year. ®

*Actually, both are backronyms. "Omotenashi" is defined here as "the art of selfless hospitality", and "a cornerstone of Japanese culture".

Equuleus is the constellation of the "little horse", or foal.