Not two, not four, but 10 cores in Intel's new PC powerhouse

Perfect for the gamer with money to burn

Intel has unveiled four new processors at Computex in Taipei, including its first desktop-grade 10-core processor – yours for the bargain price of $1,723 plus tax.

Intel's Xeon server chips have had 10 cores for a while now, but the Core i7-6950X Extreme Edition is the first PC system. The chip comes with a 25MB cache and runs at 3GHz, although that can be boosted up to 3.5GHz and Intel is unlocking the processor so overclockers can push for still higher speeds.

"It's designed not just for multi-tasking, but also for mega-tasking," said Gregory Bryant, general manager of the Connected Home and Commercial Client at Intel.

"Enthusiasts expect to push their systems with multiple compute-intensive applications at the same time. That's exactly what we've delivered."

Bryant said that the chip was aimed at the gamer who wants to play, stream, and listen to media simultaneously. The chip can handle 20 threads and 40 PCIe lanes, and carries four channels of DDR4-2400 memory. 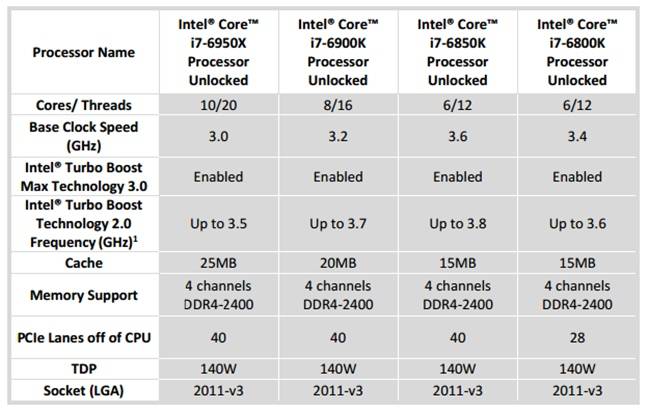 The other three new processors in Intel's Broadwell-E lineup have eight, six and six cores respectively and range in price from $1,089 to $434. They'll be out in the third quarter of the year, although sooner rather than later – Alienware is promising to have the 6950X on its virtual shelves by June 14.

All four of the new chips come with what Intel is calling Turbo Boost Max Technology 3.0, which it claims can give 15 per cent better single-threaded performance. It doesn't replace Turbo Boost Technology 2.0, but will run alongside to squeeze more power out of Intel's iron.

The new chips are also compatible with the X99 chipset, meaning you may not have to swap out your motherboard to use them.

"We optimized our full X99 motherboard line-up for this new generation of processors, to deliver the best performance imaginable," said Ted Hung, VP of MSI Motherboard sales, in a canned statement.

"Intel's leading processor design, together with MSI's dedication to bring out the best motherboards for PC enthusiasts, ensures the best experience when using the Intel Core i7 Extreme Edition processor, perfect for gamers, overclockers and content creators." ®

Intel celebrates security of Ice Lake Xeon processors, so far impervious to any threat due to their unavailability

But when they ship, Chipzilla promises its server silicon will 'double down' on defense mechanisms