These big-name laptops are infested with security bugs – study

Computers from many of the biggest PC makers are riddled with easy-to-exploit vulnerabilities in pre-loaded software, security researchers warn.

The research from Duo Security shows that bloatware is not just a nuisance that causes a lag in system boot-up, but a security risk. Laptops from Acer, Asus, Dell, HP and Lenovo all have at least one security vulnerability that can lead to a full system compromise. Most of the vulnerabilities would be straightforward to exploit even for technically unsophisticated hackers, according to Duo Security.

Lenovo copped an enormous amount of flack after it began bundling Superfish adware with some of its computers in September 2014. Superfish adware was installed on some Lenovo PCs with a trusted root certification authority (CA) certificate, allowing an attacker to spoof HTTPS traffic.

A machine with Superfish VisualDiscovery installed will be vulnerable to SSL spoofing attacks without a warning from the browser, as US CERT warned around the time the scandal broke in early 2015.

Duo's research shows the Superfish controversy was but an extreme example of a wider security problem involving pre-installed software from multiple manufacturers.

"Some apps do nothing more than add a shortcut to launch your web browser to a specific site.

"The OOBE [out-of-box experience] is annoying to most people for a number of reasons. In addition to wasting disk space, consuming RAM, and generally degrading the user experience, OEM software often has serious implications on security. A few examples include Superfish, which abused the Windows Platform Binary Table to install persistent adware on unwitting Lenovo users' personal computers. The eDellRoot fiasco made a mess of the Windows root certificate store for Dell users."

The two-factor authentication firm reckons "simple enhancements" like the consistent use of encryption, specifically transport layer security (TLS), would have significantly raised the bar for attackers. 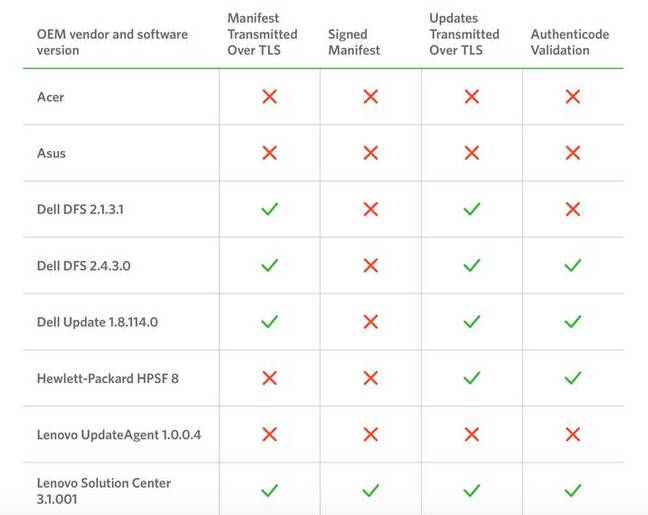 Duo Security identified and reported twelve different vulnerabilities across all of the vendors:

Every vendor shipped with a preinstalled update that had at least one vulnerability, resulting in arbitrary remote code execution and thereby complete compromise of the affected machine.

"OEM updaters are highly privileged, easy to exploit, and not difficult to reverse engineer – coupled with limited security review, this creates a perfect storm for an attacker," Duo concludes.

Duo's study of OEM updates was put together by Darren Kemp, Chris Czub and Mikhail Davidov.

El Reg passed on Duo's research to Acer, Asus, HP and Lenovo with a request for comment. No word back, as yet. Dell has responded since the publication of the story to say:

We are aware of the Duo Security report. As always, customer security is a top priority for Dell. And like Duo Security called out in the report, we fared comparatively well in their testing and continue to test our software to identify and fix outstanding vulnerabilities as we examine their findings more closely. We thank those in the security community like Duo Security, whose efforts help us protect our customers through coordinated vulnerability disclosure.