Helium... No. Do you think this is some kind of game? Toshiba intros 8TB desktop drive

Toshiba has upgraded its X300 gaming/workstation desktop drive from 6TB to 8TB capacity, continuing to sidestep any moves to helium-filling tech.

This is a 3.5-inch drive spinning at 7,200rpm, with a 6Gbit/s SATA interface and 128MB cache. The prior generation came with 4, 5 and 6TB capacity points. The latest X300 only has an 8TB capacity point and uses perpendicular magnetic recording technology. That was based, we believe, on its MG04 data centre nearline drive technology.

We understand the X300 has five platters, each with 1.6TB. It has a 4.17msec average latency and supports Advanced Format and Native Command Queuing.

This is not a very high-performance drive, spinning at nearline 7,200rpm speed and not having a flash/disk hybrid design. Flash is taking over that end of the disk drive market where drives rotated at 15,000 and 10,000rpm. 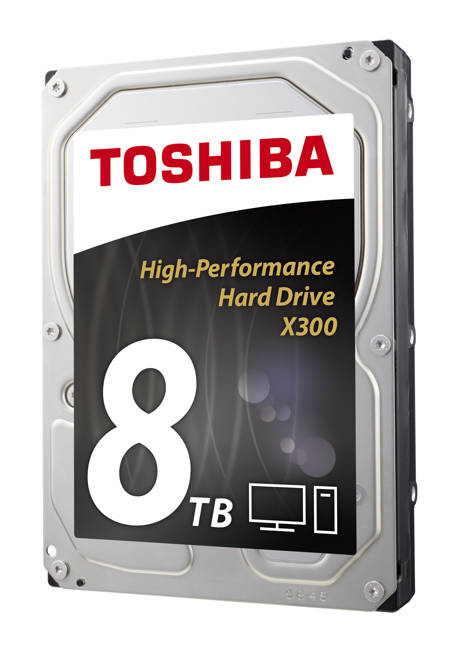 The MG04 is classed as an enterprise capacity drive and tops out at 6TB. The existence of the 8TB X300 suggests that we could see an 8TB MG04 product, if Toshiba sees a market for it, but the move to helium-filled drives by WD/HGST and Seagate, with consequent higher capacities, might give Toshiba's engineering strategists pause for thought as they debate adopting helium-filling technology and a jump to 10TB nearline drive capacity. The 8TB X300 will be available from June 2016 with a two-year warranty. Typical purchase price (TPP) will be £262. ®