Analysis Symbolic IO is a startup that claims its storage and compute technology can run database queries 60 times or more faster than other systems, and offers ”limitless enterprise storage.”

It was founded in 2012 by Brian Ignomirello, a former CTO of Hewlett Packard’s Global storage unit, and secured $1.4m in debt financing in 2013, followed by a $13.75m A-round in 2015. Ignomirello spent time at EMC and NetApp before HP.

The company has devised what it calls a computational-defined storage system and its technology is embodied in several offerings:

IRIS stands for Intensified RAM Intelligent Server, with IRIS Compute, Vault and Store instantiations of it. We are told (brain numbing alert) that IRIS “introduces a new approach to storage and computing by rethinking how binary bits are processed and ultimately changing the way data is utilised. … enterprise storage and compute no longer rely on media or hardware, instead “materialising” and “dematerialising” data in real-time.”

Well then, beam me up Scotty. What the heck does this technology tosh mean?

First of all, it seems it should be taken seriously. Here’s a tweet from Micron exec Rob Peglar: 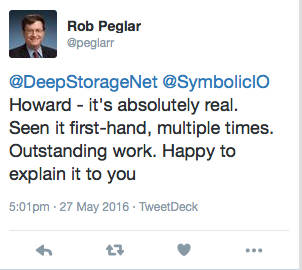 We’re told the technology is based on patented algorithms that work seamlessly with the current workflow and instruction sets. The SymCE operating system “is a conversion engine converting any data into a new sub-state, rendering the information useless to anyone else other than the systems owner, given it’s not stored.”

IRIS Vault offers physical security with Symbolic’s ASIC and sensory technology, which features a secure shipment and other features. 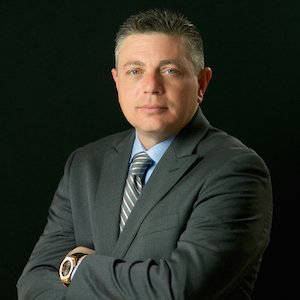 Ignomirello is utterly dismissive of all storage advances since 1996, saying: “This industry hasn’t really innovated in more than 20 years, even the latest offerings based on Flash have limitations that cannot be overcome. Our goal at Symbolic IO was to completely redefine and rethink the way computing architectures work. We’ve completely changed how binary is handled and reinvented the way it’s processed, which goes way beyond the industry’s current excitement for hyper-conversion.”

He says IRIS is way fast: “One of our early tests, allows us to run a full cable class content delivery network over 80+ nodes, while streaming 80+ full-featured movies simultaneously on one channel and requires less than 8 per cent of the CPU capacity and we had plenty of headroom to run more. IRIS is 10,000 times faster than today’s flash.”

Again, what the heck is going on here?

Of course, he may not mean an NVMe SSD, marketing bullshit being fairly imprecise. Let’s say an average SATA SSD has 200 microseconds latency, that would be 200,000 nanoseconds and dividing that by 10,000 would get us 20 nanoseconds, somewhere between XPoint and an NVME PCIe SSD.

But Symbolic IO claims IRIS Compute is 10 times faster than XPoint, implying, since Intel’s Optane latency is 7,000 nanoseconds, a latency of 0.7 nanoseconds. An L2 cache reference takes, we understand, 7 nanoseconds.

Once again, and with feeling, WTF?

SymCE “enhances the underlying media’s density and performance, beyond anything previously conceived.” There is no other information available on the Symbolic IO web site.

We kind of understand Symbolic IO code runs on X86 processors and operates in-memory. It somehow stores data in a shrunken form; deduplication is not mentioned and nor is compression. The Symbolic code executes on data independently of the media in which it is stored, whatever that means, and rewrites the language of data <—— this all sounds very New Agey. 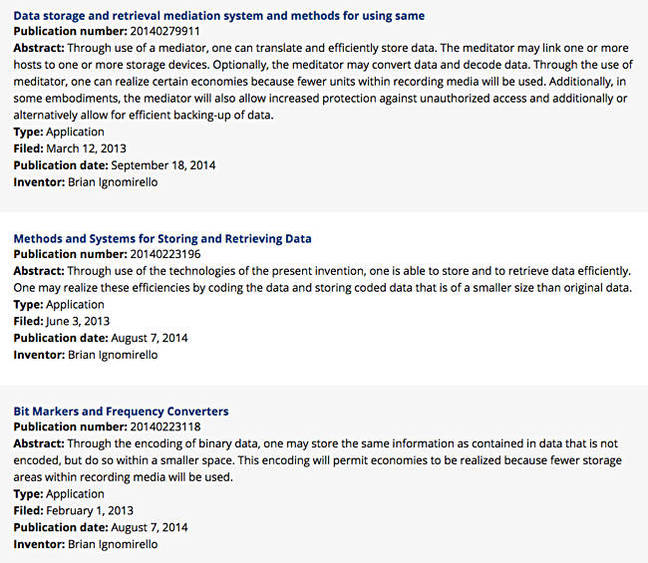 The Bit Markers and Frequency Converters patent text states: “By encoding raw data and storing the encoded data, one can reduce the amount of storage needed for a given file. Because the present invention works with raw data, there is no limitation based on the type of file to be stored.”

Okay? "Sure," we hear you say. Then set brain to high numb resistance and read this:

According to a first embodiment, the present invention is directed to a method for storing data on a recording medium comprising:

(ii) dividing each chunklet into subunits of a uniform size and assigning a marker to each subunit from a set of X markers to form a set of a plurality of markers, wherein X equals the number of different combinations of bits within a subunit, identical subunits are assigned the same marker and at least one marker is smaller than the size of a subunit; and

There is clearly a type of deduplication going on here (“identical subunits are assigned the same marker”); in IRIS Store, we suppose.

This stuff implies reading and writing data from/to storage (IRIS Store), so the speeds referenced above must exclude this activity as, otherwise, they’d reflect flash or disk latencies. Also, since media is involved then the limitless enterprise storage idea is simply tosh.

The data is expanded (rehydrated) as it is read in from storage (IRIS Store) and then processed (IRIS Compute).

There’s much, much more to understand about IRIS and, no doubt, more info will flow as the beta test progresses and Symbolic IO gets its marketing messaging in action. El Reg can’t wait.

IRIS is in beta test and a limited general availability release is set for the fourth 2016 quarter. Product prices should start at $80,000, which sounds cheap for the claims above. ®