See the most detailed pics and video from Pluto yet

Pics and video NASA has released the most detailed pictures we're likely to get from the New Horizons probe flying past Pluto, and they show the planet displaying habits most commonly associated with 60s décor.

Earlier pictures from the probe show a smooth and shiny area on Pluto's surface dubbed Sputnik Planum, consisting of polygon cells 10 to 30 miles (16 to 48 kilometers) across. Data shows this is a vast sea of nitrogen ice that is being warmed by the dwarf planet's core so that sections rise up, cool on the surface, then sink down again – just like a lava lamp.

"Sputnik Planum is one of the most amazing geological discoveries in 50-plus years of planetary exploration, and the finding by McKinnon and others on our science team that this vast area – bigger than Texas and Oklahoma combined – is created by current-day ice convection is among the most spectacular of the New Horizons mission," said New Horizons principal investigator Alan Stern, of the Southwest Research Institute in Boulder, Colorado.

The sections of nitrogen ice rise and fall relatively quickly in geological time – the team estimates the process occurs every 500,000 years or so. That keeps the surface recycling and ensures it looks smooth despite frequent impacts from space debris, the team said in a study published in Nature.

"It wouldn't surprise us to see this process on other dwarf planets in the Kuiper Belt. Hopefully, we'll get a chance to find out someday with future exploration missions there." 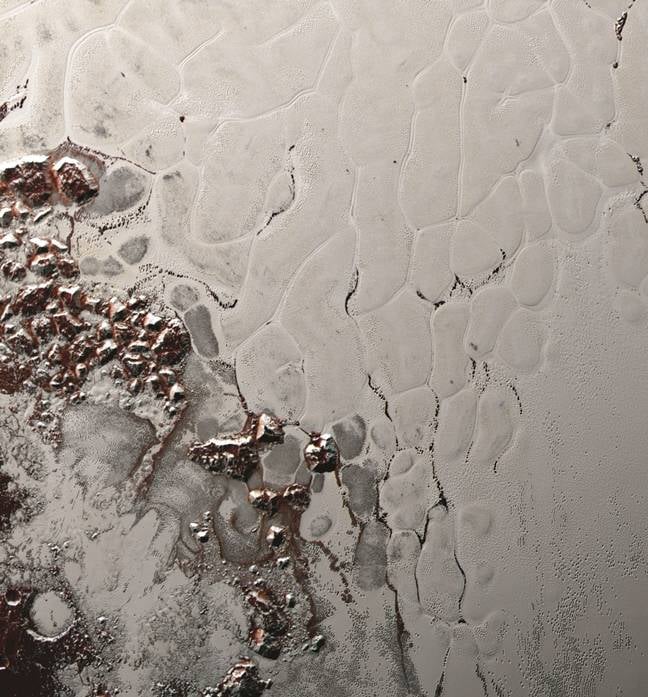 A separate paper in the journal proposes that the edges of the nitrogen polygons are inhabited by floating water icebergs that are held in place by the rising nitrogen bubbles. Only the tips of the icebergs show up in the New Horizons images, but there's enough data there to make some calculations.

Based on the size of the water icebergs, the team estimates the vast sea of nitrogen must be at least 3.1 miles (5 kilometers) deep. In order for the nitrogen convection to work and produce the polygons of such size, however, it's more likely to be 6.2 miles (10 kilometers) deep.

"What we've discovered through this mission is that cold worlds like Pluto have a different kind of activity that involves materials we think of as gases. This understanding offers a new perspective that cold worlds can be just as active and interesting as our own."

Sadly, these images of Pluto are likely to be the best we're going to see for decades, until NASA gets around to firing another probe out there. New Horizons launched in 2006 using technology that was dated at the time, and it'll take at least another 20 years before another Plutonian probe arrives.

Remarkable as the pictures are (and there is much more science still to come), the fair and balanced Fox News anchor Greta Van Susteren took issue with NASA's tardiness.

Why did they wait until NOW to release these? pics taken in 2015 and we pay their salaries in tax dollars https://t.co/hhXxrfsWEr

The clueless presenter then got schooled by a number of people online, pointing out that the probe is over three billion miles away and that distance means the probe can only manage a couple of kilobits per second data transfer rates.

NASA's first priority was to get some images back to Earth so that we could all gawk at them, but the team then switched over to prioritizing atmospheric and climate readings so they can try and understand exactly what we're looking at.

NASA has said we won't get all the data off the probe until probably the end of the year. That's slow, but it's plenty of time until it reaches its next target, 2014 MU69, four billion miles (6.4 billion kilometres) from Earth. That flyby is expected on New Year's Day, 2019. ®