If the shoe fits... it’ll be a miracle 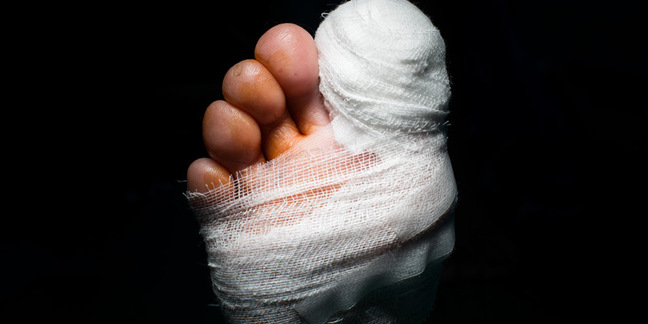 Something for the Weekend, Sir? I’d like to try these in a size nine-and-a-half or size 10, please.

Ah now, I can’t say for sure. The last time anyone in a shoe shop offered to measure my feet properly was 38 years ago. They had a floor-standing machine that I stood in while shiny chrome sliding bars tickled the four extremities of my sole. It was brilliant. Us kids would queue up to get it done again and again, like it was a fairground attraction.

Unfortunately, by the time males reach their teens, the best any high street shoe shop will offer is to rest your foot against what looks like a giant metronome but is really just a ruler and, without even looking, mutter: “Yuh, size nine”.

“Code 94s in size nine-and-a-half,” the shop assistant barks into his walkie-talkie, bored with my reminiscing, then simply walks away.

Five minutes later, he returns to tell me they “don’t have no nine-and-a-halves”. Entering into the ambiguous spirit of such double-negatives, I ask the shop assistant if they don’t not have no size 10s.

“A size 10?” he whines, as if it’s the first time I mentioned it. More shouting into the walkie-talkie. Again, he wanders off and this time I’m waiting for a lot longer than five minutes.

He eventually returns to inform me that there are no size 10s, either, and sorry it took so long cos he’d had to check in all three stockrooms, including the one on the top floor and the one in the basement.

I ask him why there are three shoe stockrooms at the extremities of the building when the footwear section of the shop is in one place.

He shrugs. It’s not that he doesn’t care: he genuinely doesn’t know why he’s forced to play along with this stockroom game and no doubt he would rather be sipping cocktails on a beach. As would I.

In fact, I’m wishing I’d just stayed at home and tried my luck ordering online. That way, I’d be able to see what stock the retailer had available within seconds, order straight away and be walking around in my new shoes two days later.

Unfortunately, I’d done this before and the shoes they send me in the post NEVER fit, regardless what size I order. I even tried a size 13 and they still pinched. Their only saving grace was that they made people spontaneously smile whenever I stumbled into a room because it reminded them of circus coming to town.

My problem is that I have freakish, deformed feet that, while not particularly long, are abnormally wide. They are like paddles.

How I manage to walk down a hallway without getting my massive, skate-sized feet wedged between the walls is a miracle. If I walk barefoot across a yoga studio, it sounds like a slow handclap. When I cross my legs in the living room, magazines flutter off the table, window panes rattle and all the doors upstairs slam shut.

So visiting a physical shop and trying on the physical goods on my physical physique is obligatory when it comes to my slappity soles. And putting up with crap service in the shop is, of course, part of the modern retail experience.

However, it’s just too facile to blame crap service on the dude serving you, when in fact both of you are victims of the appalling retail systems cobbled together by incompetents who always seem to sit at board level.

That said, some shop assistants really are quite terrible. There was that time when I reached the front of a queue in a cramped shop, only for the teenage deadhead at the till, with her bovine orange face just inches away from mine, to suddenly burst out singing, loudly and very badly indeed, to some ghastly Kiss FM shite playing on the radio behind her.

It felt like I was handing money over to a pet dog that had been left alone and howling for its master. Or, if you prefer, akin to being uncomfortably close to Maria Carey when she does one of her "letting air escape from a balloon very slowly" impressions.

Despite all that, everyone at some point in their lives should try working in retail, if only to experience their fellow man from the other side of the counter.

My daughter, for example, found punters fascinating when she got her first part-time job while studying at Uni. She was particularly impressed while serving at a tea shop in London’s Covent Garden when someone came in and asked: “Do you have any tea?”

As I explained to her, saying “Do you have any tea?” is probably a stereotypically apologetic English way of asking what tea selections might be available for purchase, and not intended as a question that demands or expects a “yes” or “no” answer. But it does provide an insight into the daft things that customers say and do.

By the way, things have moved on for my daughter since she graduated with a first-class honours in classics and archaeological studies last summer. No more tea shop for her!

She now works at a coffee shop.

Anyway, frustrated by my shoe-purchasing experience, I conducted my own top-secret, undercover research into what it’s like for the poor sods working at this particular establishment – a leisurewear retailer of some note, I should add.

Despite having a nationwide presence, owning several major brands and itself close to becoming a household name, this retailer has managed to push 16 years into the millennium apparently without any kind of computerised shop-floor stock management whatsoever. Indeed, I learn that stocktake checks take place three times a year, manually, like in t’old days.

I can imagine the board meeting that set up the current system. After some opening remarks wishing the best of health to the ageing Queen Victoria, the long-sideburned and big-moustachioed chairman probably invited suggestions for improving the sales effectiveness of the company’s footwear department.

There is awkward silence around the boardroom table until the newest member, an over-promoted twat in charge of technological innovation and given the inflated title of "vice-president, steam", pipes up.

“Stock ledgers are a thing of the past!” he evangelises, Ted Talk fashion. “Dump all that paper and get rid of those air-pumped messaging tubes. Replace everything with walkie-talkies!

“OK, sure, they’ve not been invented yet and I’m not even sure what they are, but I was assured by a tech startup called Shittr that if we invest now by paying their founders a thousand guineas a week, walkie-talkies will be all the rage in stockroom management by 2016!”

Bafflingly, this massive retailer would rather watch almost-customers walk out empty-footed in frustration than invest in Detego or some other proper stock management system. Intelligence? Connectivity? We can’t afford systems analysis, so bollocks to that, get on the walkie-talkies, now!

This is certainly not lost on the staff. My under-cover insider hinted to one of the supervisors that the way in which shoes are stocked, stored and sold doesn’t make any sense. Surely it just puts people off?

Alistair Dabbs is a freelance technology tart, juggling IT journalism, editorial training and digital publishing. He bewails the state of high street footwear retailers and complains about the poor quality and lack of comfort of the shoes he buys, yet he’s too mean to spend money going to a proper shop for a decent pair.

It is but 'LTE with new shoes': Industry bod points a judgy finger at the US and Korea's 5G fakery

Wait until you see the real thing, folks...

You'll get a kick out of this: Qualcomm patents the 'Internet of Shoes'

Web-connected sneakers? We imagine a lot of sole searching when/if these get hacked

Hold on to your laces, email server was compromised

Google freezes Android P: Get your shoes on, tire-kicking devs

Hey you smart, well-paid devs. Stop clicking on those phishing links and bringing in malware muck on your shoes