Lives could have been put at risk by pushy upgrade

When you're stuck in the middle of the Central African Republic (CAR) trying to protect the wildlife from armed poachers and the Lord's Resistance Army, then life's pretty tough. And now Microsoft has made it tougher with Windows 10 upgrades.

The Chinko Project manages roughly 17,600 square kilometres (6,795 square miles) of rainforest and savannah in the east of the CAR, near the border with South Sudan. Money is tight, and so is internet bandwidth. So the staff was more than a little displeased when one of the donated laptops the team uses began upgrading to Windows 10 automatically, pulling in gigabytes of data over a radio link.

And it's not just bandwidth bills they have to worry about.

"If a forced upgrade happened and crashed our PCs while in the middle of coordinating rangers under fire from armed militarized poachers, blood could literally be on Microsoft's hands," said one member of the team.

"I just came here recently to act as their pilot but have IT skills as well. The guy who set these PCs up didn't know how to prevent it, or set a metered connection. I am completely livid."

The Reg has been reporting a lot on the Windows 10 upgrade fiasco, so decided to investigate – and the story checks out. A team member told us the Chinko Project uses satellite communications for internet access and gets charged quite a lot for data, so the multi-gigabyte automatic upgrade was even more frustrating than for the rest of us.

"We don't need to upgrade our internet, as the limited bandwidth we have is sufficient. But we just can't abide these forced upgrades and secret downloads," one member, who asked to remain anonymous, told El Reg. "We have donated laptops with Windows 7 and 8 all over the place that I'm trying to track down and fix."

To add insult to injury, the team had only just got their satellite system up and running again after a storm tore open the roof of the building housing the setup. After taking a battering, the hardware is operational again, but is needed for far more serious things than pumping up Windows 10 usage figures. 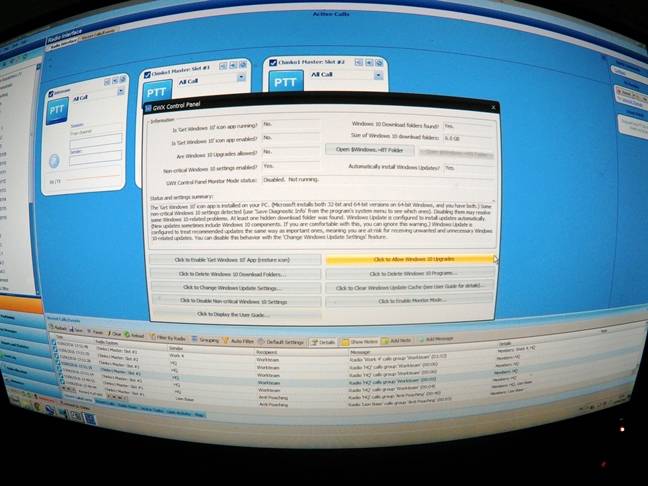 Stopped ... One of the project's satellite-linked computers installing a Windows 10 blocker

It's not easy running something like the Chinko Project. The non-profit group is trying to protect a huge amount of land containing forest and savannah elephants, as well as lions, leopard, and the beautiful Bongo antelope.

The project set up motion-activated cameras over the area to catalogue and research the surrounding wildlife, and has collected over 700,000 sightings. It works with local people to provide employment and education in its quest to preserve this unique part of Africa.

However, they are having to deal with armed ivory poachers who see the preserve as a source of quick cash, as well as cattle herders harvesting bush meat for sale. The Lord's Resistance Army, a religious cult, has also been spotted in the CAR, adding to the site's troubles.

The project has rangers who patrol the area as much as possible against well-armed and determined foes. To do this more efficiently, the project has a small aircraft that can coordinate movements and track both wildlife and incursions.

Sadly, an unexpectedly rough landing has put the aircraft out of action and the group is now trying to raise the funds to get a new one. It's vitally important to get the team airborne again, so if you want to do some good check out the fundraising site and contribute some beer vouchers if you can, and Microsoft should also hand over a big donation for inconveniencing and potentially endangering the group. ®