While the E5 v4 CPUs are specced for scale-out systems, the E7 v4 family – announced today – is aimed at scale-up work: think analytics and in-memory database software that need lots and lots of RAM per node. An eight-socket E7 v4 system can support up to 24TB of RAM, twice that of the previous generation that launched last year.

Here's the vital statistics of the new chips compared to the v3 family:

The E7 v4 gang uses the Broadwell microarchitecture, and are fabricated using a 14nm process. They can be dropped right into sockets for E7 v3s, easing any upgrades. Intel reckon you'll get, on average, up to a x1.3 performance boost by switching from v3 to v4.

The E7 v4 chips feature all sorts of architectural goodies that are present in the E5 v4 cousins that we did a deep-dive on here. These include interrupts delivered directly into virtual machines; reduced overhead when the processor enters and leaves a VM; faster cryptographic operations; tighter controls to prevent dodgy code running in kernel mode from accessing userspace; cache usage tracking; and plenty more.

The new processors feature up to 24 cores per socket and up to 60MB of last-level cache, up from the previous generation's 18 cores and 45MB. There's also Broadwell's cluster-on-die technology that chops up each chip into a two-socket NUMA box, allowing the operating system to carve the processor into two NUMA domains. One domain stays on one ring of cores and the other domain on the second ring – the ring structure is described in the deep-dive above. 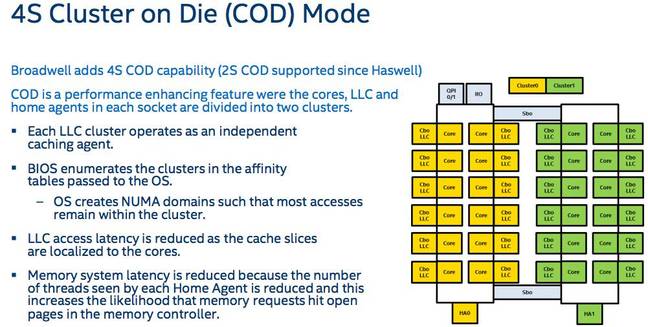 Here's Intel's benchmarks for the new parts, which also handily lists the various configurations of the new components: 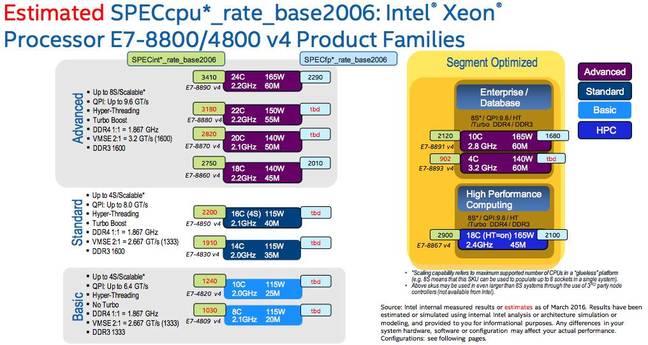 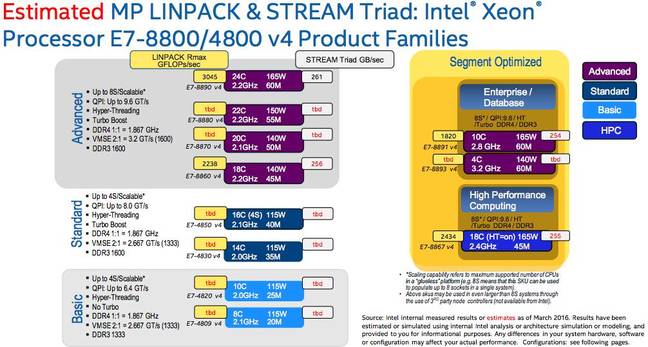 The processors are hovering around the 2GHz to 2.2GHz mark, in terms of clock speed, depending on how many cores you want. The power consumption ranges from 115W to 165W. Here's the sort of RAM configurations Intel recommends: 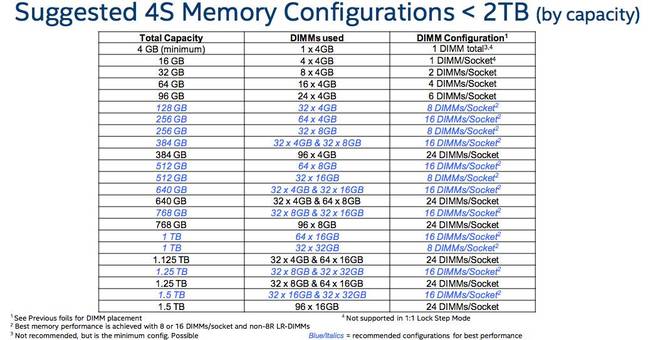 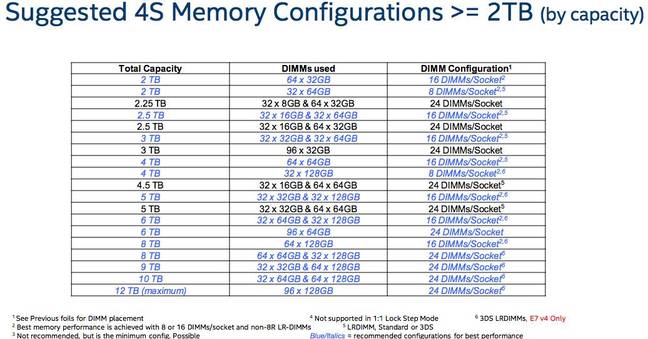 "Intel is coming to the finish line with its 14-nanometer chip making process with the launch of the 'Broadwell' generation of Xeon E7 server processors in China today," Tim Prickett Morgan, coeditor of our sister site The Next Platform, noted in his analysis of the new processors.

"Why China? Because for reasons that are not immediately obvious but are completely beneficial to Intel, the Chinese market has for the past several years been adopting four-socket servers in large scale datacenters at a rate that is considerably higher than their peers in the rest of the world. These new Xeon E7 v4 processors will be a big hit for big iron there and anywhere else where having a big shared memory for applications is key."

The chips are available now. The v4 family is essentially a logical next step for Intel from v3. There are the aforementioned Broadwell enhancements plus a performance boost from having more cores and a larger cache. For pricing and data sheets, head over to the Intel ARK. ®