Kenya yesterday suffered a four-hour nationwide blackout caused by a monkey tripping a transformer at a hydroelectric power plant.

'Leccy producer KenGen said: "At 1129 hours this morning, a monkey climbed on the roof of Gitaru Power Station and dropped onto a transformer tripping it. This caused other machines at the power station to trip on overload resulting in a loss of more than 180MW from this plant which triggered a national power blackout."

The company posted a snap of the offending animal, and assured that it was alive and well in the custody of the Kenya Wildlife Service. 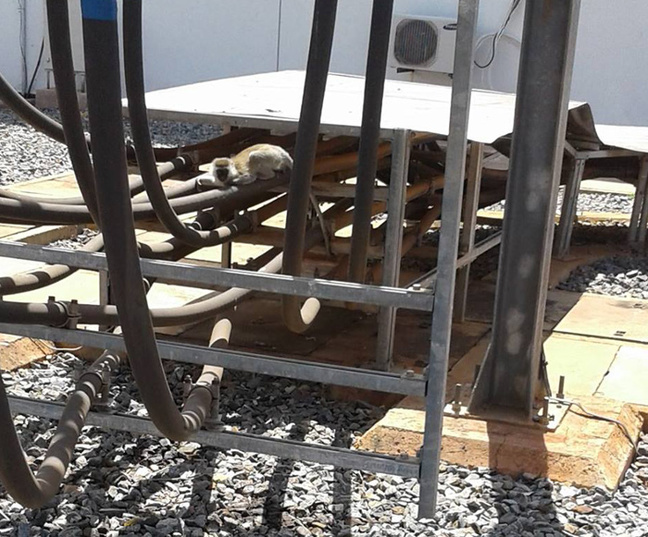 Mo monkeys were harmed during the making of this blackout. Pic: KenGen

KenGen explained that its facilities are "secured by electric fencing which keeps away marauding wild animals", adding: "We regret this isolated incident and the company is looking at ways of further enhancing security at all our power plants."

According to this report, Gitaru, which lies some 115km northeast of Nairobi, is "the largest hydropower station in East Africa". Its capacity is 225MW, representing 9.6 per cent of the Kenya's total hydroelectric output of 2,333MW, which in turn provides 35.1 per cent of the country's electricity. ®