Why everyone* hates Salesforce's Marc Benioff

*Trump followers demand an enemy. Silicon Valley is that enemy

Opinion Technology has been replacing men with machines for over 200 years. It’s a good thing, except for the men and women whose jobs get replaced.

We laugh at the Luddites who sought to destroy power looms and frames in the 1810s. We thrill to Mary Shelley’s story from that same decade, of science as a malevolent force creating monsters.

But are we really so different?

Today technology is the weaver. Clouds and devices create the machines and the monsters. Marc Benioff, CEO of Salesforce.com, is their happy champion, urging us on to the new world and scolding the old for its prejudices.

Benioff and other captains of Silicon Valley industry look around them and see waste. They see market friction. They use the Salesforce.com cloud to eliminate that friction, replacing salespeople with apps and middle managers with clouds.

They never consider the price. Since 2010, US counties with populations under 100,000 have lost more businesses than they have created.

Consider a small town, or an ex-urban paradise far from the city centre. Even when the WalMart or Dollar General replaced downtown, even when the factories closed and the farms turned back to forest, there remained a professional elite that kept the heart beating.

The car dealer. The real estate office. The insurance office. The travel agent. The title lawyer. The banker.

These were good businesses. They gave the small town its leaders and its structure. They supported the civic organizations, manned the local government, provided a few lucky families with the means to control the society and perpetuate themselves.

This is the legitimate complaint of Trumpistan, that vast movement of workers, managers and community leaders now marching with pitchforks, attacking the future, demanding a return to the past. Back in the 20th century the elites in their two-story tract homes and six-figure incomes saw technology as a boon, offering a better life and useful tools. Now those futures have exploded, disappeared before their very eyes, replaced by a scold in San Francisco who demands they accept some she-male or girl-boy peeing in the stall next to their innocent daughters, well hell no! 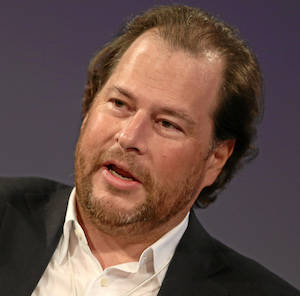 Marc Benioff insists he just wants equality, as he campaigns against discrimination in North Carolina and elsewhere. But alongside the fight against HB2, Benioff and other tech titans have enjoined the battle for H1B, a demand that tech be able to get the talent they need from India, or China, wherever it happens to be. Trumpistani kids are already losing the fight for elite college places to the wealthy of overseas, and now these kids want to cut in line – what will happen to US? They've already lost jobs to workers at overseas manufacturers - jobs the leader of Trumpistan says he'll bring back on shore.

Benioff and his fellow billionaires see none of this. Locked behind gated walls, in their private jets, shuttling between “meetings” at luxury resorts to be interviewed on TV yet again, they are shocked, shocked, that anyone – let alone one of two major American parties – could possibly act as heirs to Ludd, could possibly reject the future of ease, safety, and wealth clouds and apps can provide.

Silicon Valley shrugs its shoulders at this. New jobs will appear, they insist. There will be better jobs, easier jobs. Trust us. It has always been that way. Think of it as evolution in action.

Why should we trust the force that is tearing the heart out of our towns, destroying the power of our elites, and scattering our children to the four winds? Trumpistan replies.

And so they come with their pitchforks, desperate to destroy the power looms of the future, while the Benioffs of the world, the Dr Frankensteins of the 21st century, sip their champagne and assure themselves that the villagers will come to their senses, eventually. They’ll survive, they’ll evolve, they’ll realise in time we’re just doing all this for their benefit.