Reg photography special: Get a better snap of a BLACK HOLE

MIT boffins have developed an algorithm to help astrophysicists see the unseen, improving the resolution of black hole “images”.

The EHT stitches together data from six observatories with the aim of observing the “immediate environment” of black holes with, as it states, “angular resolution comparable to the event horizon”. Its observational wins include, in 2012, working out that the supermassive black hole at the centre of M87 is spinning.

One of the collaborators' quests is to achieve better resolution, and that's where the CSAIL work comes in.

The problem, as CSAIL explains, is that the long wavelengths received by radiotelescopes are inimical to high resolution.

Bouman's work addresses resolving the timing differences between different telescopes – for example, introduced by the different distance through the atmosphere a signal passes. 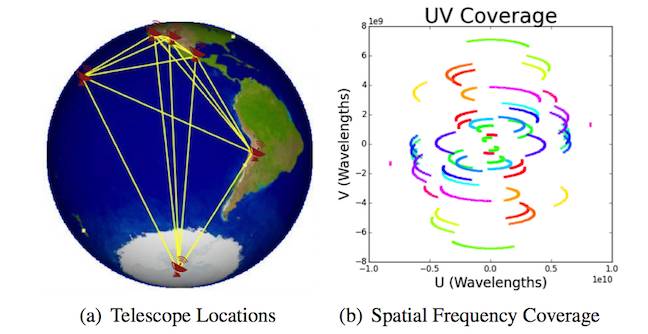 The work offers a was to accurately model spatial-frequency measurements, and a simplified optimisation strategy to model the effects of atmospheric noise on VLBI (very long baseline interferometry) data.

Her approach is an algebraic solution, CSAIL says: multiplying the measurements from three telescopes (for example) will cancel out the delays caused by the atmosphere. That means a measurement has to be made at three telescopes rather than two, but the better resolution is worth it.

The work is to be presented at the Computer Vision and Pattern Recognition conference at the end of June.

The paper is based on this December publication at Arxiv, and the boffins have published a dataset for other researchers to train their algorithms.

There's also a YouTube video about the dataset below. ®