Polar storms spin out in predictable directions as seasons change

The three types were observed using the Mars Reconnaissance Orbiter and its onboard Mars Climate Sounder. That craft and instrument have been orbiting Mars since 2006, when they arrived just in time to take over from the ailing Mars Global Surveyor that did the job since 1997.

The two orbiters' presence means we've got almost 20 years of lovely data about Mars to consider. The seasonal storm theory was derived from the most recent six years of observations.

Mars' dust storms are of considerable interest because dust absorbs heat and there's not much heat around on Mars. Knowing where and when temperatures will become even more uncomfortable than usual - dust storms can raise or lower temperatures by around 35 degrees celsius - is obviously useful when planning visits to the red planet. ® 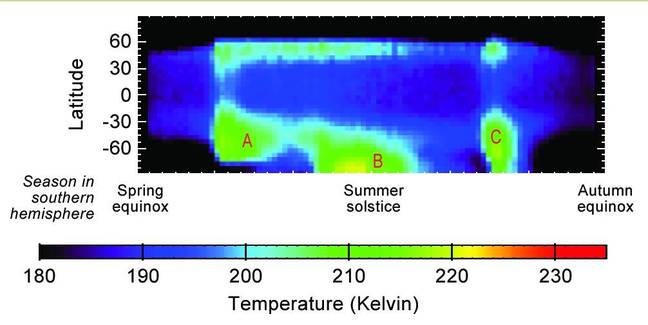