DataCore has answered criticism of its Parallel Server SPC-1 benchmark [PDF] – that it was not applicable to enterprises, as it lacked high availability (HA) – by running an HA version that is the fifth-best SPC-1 benchmark performer ever.

It is also the third-best ever price–performance score on the benchmark, with the top three scores all DataCore systems using its parallel server software technology.

The software used the latest PSP5 parallel server code release, which delivers more IOPS than the prior PSP4 version. The earlier single-node PSP4 configuration produced an average response time of 0.32 milliseconds at 459,290.87 SPC-1 IOPS with an industry-best price–performance of $0.08 per SPC-1 IOPS.

DataCore chairman Ziya Aral said, "That should help to put an end to the myth that it is Fibre Channel latencies that slow down SAN performance. In our experience, the opposite is true. DataCore Parallel I/O speeds up everything it touches – the fabric most assuredly included."

The company points out that competing SPC-1 storage products take up multiple 42U racks and many square feet of floor space, whereas the DataCore configuration occupies just 12U of one rack.

A 2TB 5,400rpm SATA disk drive was the system disk drive for one system; it was a 500GB SATA SSD for the other server. 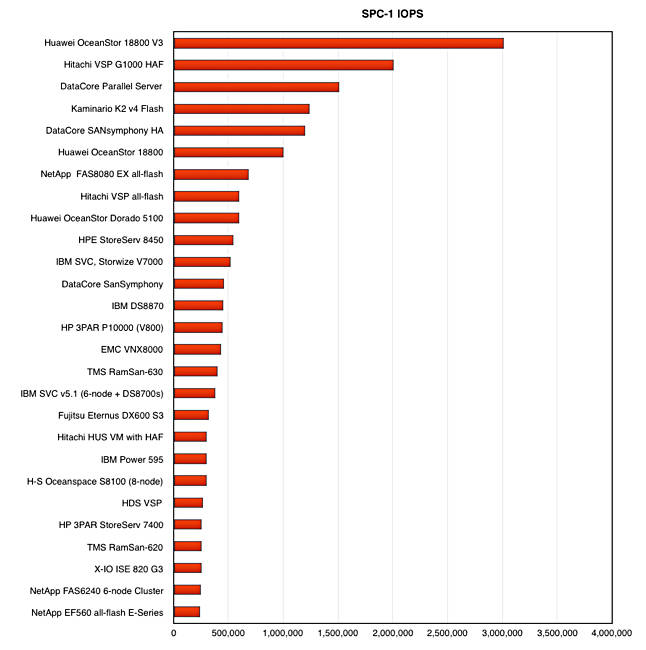 And here are the top SPC-1 price–performers: 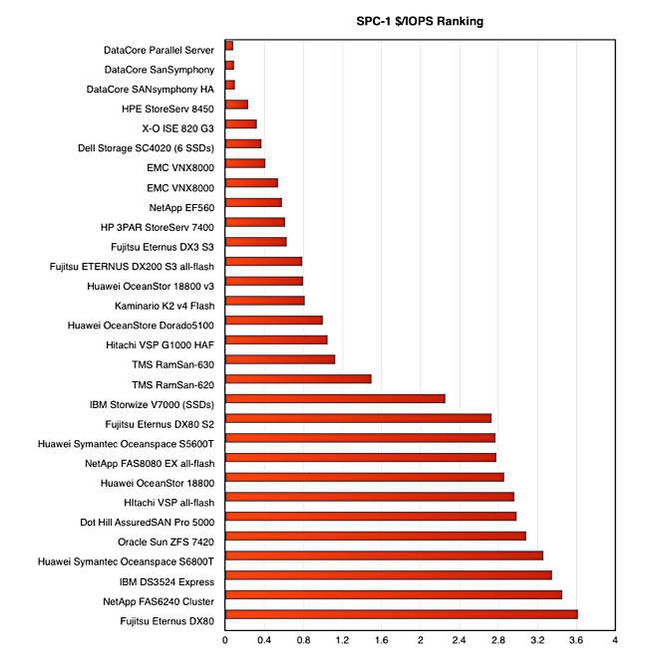 DataCore thinks its "new results are sure to send a wake-up call to a storage community obsessed with debating how to speed up latency-sensitive applications."

Wendel points out that, looking at the Hitachi VSP G1000 (and HP's OEM'd equivalent) response times at various system loadings, "You can arbitrarily choose any response time, and DataCore will deliver 5x to 10x more IOPS at that response time ... If ~220 microseconds is a desired response time, then the Hitachi ... can only manage 200K IOPS@220us while DataCore is delivering 1.2 million IOPS@217us."

El Reg just wonders how much longer other storage vendors, both array and converged/hyper-converged, can carry on apparently ignoring DataCore's parallel server tech while it almost casually blows their products out of court in SPC-1 terms. They must suspect, as we do, that theoretically, DataCore could produce a configuration that could top three million IOPS and take the absolute SPC-1 benchmark crown away from Huawei.

Imagine that – a $2.4 million system crucified by one costing, what, a fifth as much?

And then ... populate the servers used with NVMe flash and see the suckers really fly.

Another thought: 12Gbit/s SAS and NVMe PCIe interconnects to all-flash systems are kludges to get around the fact that server IO isn't being processed by multiple cores. IO processing is CPU-bound and not IO-bound. Parallelize IO processing and existing HW and SW IO stacks can fly, because they will no longer be CPU-bound.

The entire recent investment in developing all-flash arrays could have been avoided simply by parallelizing server IO and populating the servers with SSDs. Is this fantasy? Look at the SPC-1 numbers and charts above and think about that question.