An deartháir mór is watching you

The Garda Síochána has proposed to expand its surveillance on Irish citizens by swelling the amount of data it collects on them through an increase in its CCTV and ANPR set-ups, and will also introduce facial and body-in-a-crowd biometrics technologies.

Announced as part of its new five-year programme to “professionalise” and “modernise” the force, the Garda is seeking to introduce new “advanced IT systems” which will cost more than €200m to roll out.

They come after a recent Garda Inspectorate report found that some of the force's IT systems “are 20 years out of date,” and many “didn't connect with each other.”

“Gardai on the beat have no hand-held devices on which to record information,” the programme claimed, stressing the need for the update as their systems “don't give Garda members access to all the information they need to investigate crimes – or provides it in a disjointed way.”

Most of those updates are fairly uncontentious. A simple Investigations Management System will be completed by Q4 2017 to computerise the management and tracking of “all tasks and information related to an investigation from crime scene to court.”

Five other key programme initiatives were announced alongside this in the 120-page Modernisation and Renewal Programme 2016-2021 document (PDF) which put forwards the force's plans. 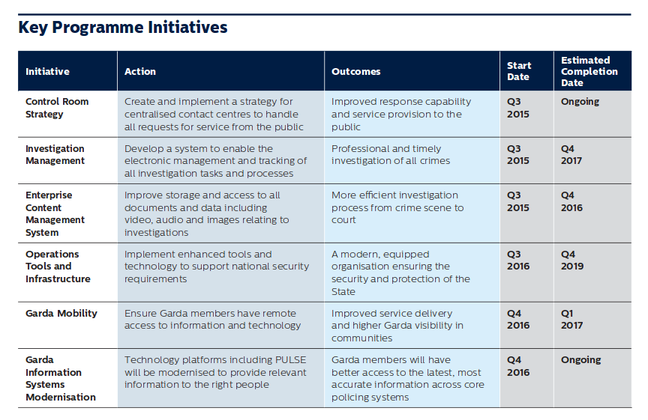 As part of the Enterprise Content Management system, the programme will also feature an “expansion” in its use of meatspace surveillance technologies, including “CCTV, ANPR (Automatic Number Plate Recognition),” and introducing biometric technologies, namely facial and body-in-a-crowd recognition, “to identify key criminal and terrorist targets.”

Similar to the UK Home Office's secret centralised database which The Register uncovered last week, this system will “allow investigators to search for and access all Garda content relevant to their case such as documents, photos, CCTV, videos and audio.”

Having the facility to centrally store CCTV and audio files will enable the deployment of advanced CCTV technology to automatically analyse CCTV and make greater use of the vast amounts of information available through CCTV for the relevant areas. This will include expansion of the Automated Number Plate Recognition (ANPR) technology and its integration into the centralised storage system to allow for wider access and analysis

No further explanation on the use of facial recognition technology was available in the five-year programme publication, excluding a use-case map excerpted below.

The use of Automated Facial Recognition (AFR) technology is fairly troubled in the UK, with the independent biometrics commissioner warning the government that it was risking inviting a legal challenge back in March. It is no less of an issue in Ireland, where the Data Protection Commissioner (DPC) audited Facebook in 2011 and 2012, and scolded the Zuckerborg over its use of facial recognition technology.

In a statement sent to The Register, the DPC said that "as a result of engagement with this Office, the use of facial recognition (i.e. the “tag suggest” feature) which is in use in the USA was disabled for EU users of Facebook on foot of data protection concerns expressed here and in the EU. Facebook have not notified us of any re-introduction of facial recognition processing. We continue to monitor the situation."

An audit of data protection issues affecting the Garda Síochána was also carried out by the DPC, using its statutory powers to audit organisations, over the period 2011 to October 2013. This was published in March 2014 by the Gardai (PDF).

As the DPC told us, the report "highlighted areas where improvements were required," although it did not comment, though asked, on whether it would be taking as strong a line with the Garda as it had with Facebook on the construction of a facial recognition database.

Simon McGarr, a solicitor with Digital Rights Ireland, told The Register: "Whatever the Gardai intend to bring forward as a proposal will have to meet the requirements set out by the CJEU in the DRI case and article eight of the charter of fundamental rights."

Asked about the legal situation regarding the planned expansion in surveillance technologies, and the introduction of facial and body-in-a-crowd recognition, a Garda Síochána spokesperson said: “A possible response is that all initiatives outlined in the Modernisation and Renewal Programme will be assessed against and will conform with current legislation.”

They added: “If changes are required to support implementation then these will be progressed in conjunction with the Department of Justice and Equality.” ®